Pope Francis to laity: 'It is time for you' to share the Gospel

Laypeople have a mandate to spread the Gospel in their concrete circumstances through the witness of their lives, Pope Francis said in a message sent Friday to Catholics attending a congress on laity in Spain. 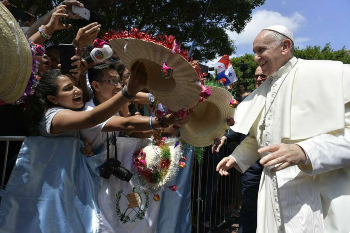 Vatican City, (CNA) - Laypeople have a mandate to spread the Gospel in their concrete circumstances through the witness of their lives, Pope Francis said in a message sent Friday to Catholics attending a congress on laity in Spain.

"The living Word of God needs to be preached with passion and joy through Christian witness, to be able to tear down even the highest walls that isolate and exclude," the pope wrote in the message, delivered Feb. 14.

"It is time for you, men and women engaged in the world of culture, politics, industry... that with their way of life are able to bring the novelty and joy of the Gospel wherever they are."

Francis encouraged lay people to live their vocation "immersed in the world" and "with God and with the Church" to listen to the people around them.

He also asked lay Catholics to be careful of the temptations of clericalism, competitiveness, stiffness, negativity, and "ecclesial careerism."

These temptations "suffocate the specificity of [the laity's] call to holiness in today's world," he added.

The pope emphasized that "we are part of a Christian community. We are not one more group, nor an NGO, but the family of God summoned around the same Lord."

"Remembering this leads us to deepen our faith every day: a gift that is lived in liturgical action, in the common prayer of the whole Church, and which must be announced."

He said "the missionary mandate is always current."

Pope Francis sent his message on the feast of Sts. Cyril and Methodius, the patron saints of Europe along with St. Benedict.

Brothers, priests, and missionaries, Sts. Cyril and Methodius "promoted a great evangelization in this continent, bringing the message of the Gospel to those who did not know it, making it comprehensible and close to the people of their time," the pope said.

Sts. Cyril and Methodius are sometimes called the "Apostles of the Slavs," for their work spreading the Gospel throughout Eastern Europe in the ninth century.

"With their ingenuity and testimony, they were able to bring the light and joy of the Gospel to a complex and hostile world," Francis said about the saints, noting that their example teaches people to live the faith, not in isolation, but in community, "as people loved and cherished by God."

The National Laity Congress is taking place in Madrid Feb. 14-16.