Pope Francis published his response to the Vatican's 2019 Amazon synod in an apostolic exhortation Wednesday. Despite widespread speculation following the synod, the pope does not call for married priests, but seeks to expand "horizons beyond conflicts." 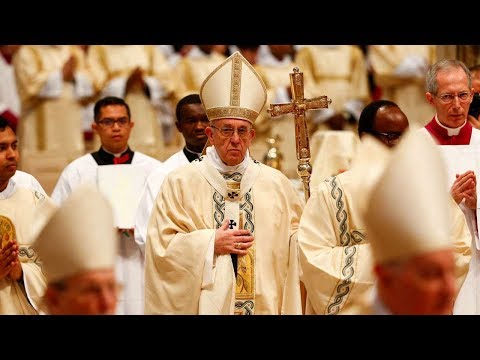 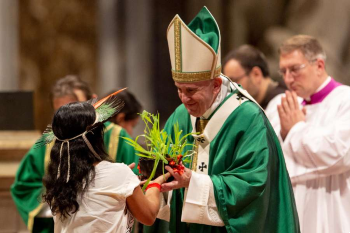 Vatican City, (CNA) - Pope Francis published his response to the Vatican's 2019 Amazon synod in an apostolic exhortation Wednesday. Despite widespread speculation following the synod, the pope does not call for married priests, but seeks to expand "horizons beyond conflicts."

The exhortation does not quote from recommendations made by bishops at the Vatican's October meeting on the Amazon. Instead, Pope Francis "officially present[s]" the synod's final document alongside his exhortation, asking "everyone to read it in full."

The topic of ordaining viri probati, or mature married men, was a point of considerable discussion at the synod, and made waves across the Church.

While Pope Francis did not rebuff the idea directly in his exhortation, the Vatican's editorial director, Andrea Tornielli, addressed it in a column released alongside the apostolic exhortation

Speaking of priestly celibacy, Tornielli wrote that "the Successor of Peter, after praying and reflecting, has decided to respond not by foreseeing changes or further possibilities of exceptions from those already provided for by current ecclesiastical discipline, but by asking that the essentials be the starting point," for discussions regarding priestly ministry in the Amazon.

"He asks us to begin again with a vivacious and incarnated faith, with a renewed missionary thrust rooted in the grace that allows room for God to act rather than on marketing strategies or the communication technologies relied on by the religious influencers," Tornielli added

Nearly half of the pope's own 24-page document is dedicated to outlining the pontiff's "Ecclesial Dream" for the Amazon region, in which Pope Francis stresses the singular role of the priest, while affirming the laity's ongoing contributions to evangelization.

"No Christian community is built up which does not grow from and hinge on the celebration of the most holy Eucharist. This urgent need leads me to urge all bishops, especially those in Latin America, not only to promote prayer for priestly vocations, but also to be more generous in encouraging those who display a missionary vocation to opt for the Amazon region," Pope Francis wrote in the exhortation, published Feb. 12.

Pope Francis said that Querida Amazonia provides his "own response" to the discussions that took place at the Synod of Bishops for the Pan-Amazonian region October 6-27.

In Querida Amazonia, Pope Francis warns against an outlook that restricts "our understanding of the Church to her functional structures." The pope also rejects a narrow vision of "conceptions of power in the Church" that "clericalize women."

"Efforts need to be made to configure ministry in such a way that it is at the service of a more frequent celebration of the Eucharist, even in the remotest and most isolated communities. There is also a need for ministers who can understand Amazonian sensibilities and cultures from within," Pope Francis wrote.

"The way of shaping priestly life and ministry is not monolithic; it develops distinctive traits in different parts of the world. This is why it is important to determine what is most specific to a priest, what cannot be delegated. The answer lies in the sacrament of Holy Orders, which configures him to Christ the priest. The first conclusion, then, is that the exclusive character received in Holy Orders qualifies the priest alone to preside at the Eucharist," Francis said.

The pope called for revision to "the structure and content of both initial and ongoing priestly formation" to be more pastoral and in dialogue with Amazonian cultures. Francis said that "the stable presence of mature and lay leaders endowed with authority" is required in the region, calling for more permanent deacons and women religious to address the Amazon's challenges.

Following the controversy sparked by the presence of indigenous statues at Vatican events during the Amazon synod in October and the subsequent apology by Pope Francis for "Pachamama" being thrown in the Tiber River, Pope Francis uses the post-synodal apostolic exhortation to appeal for unity and sensitivity to the over 110 distinct indigenous cultures in the Amazon.

"Let us not be quick to describe as superstition or paganism certain religious practices that arise spontaneously from the life of peoples," Pope Francis wrote.

"It is possible to take up an indigenous symbol in some way, without necessarily considering it as idolatry. A myth charged with spiritual meaning can be used to advantage and not always considered a pagan error. Some religious festivals have a sacred meaning and are occasions for gathering and fraternity, albeit in need of a gradual process of purification or maturation," he explained.

"The greatest danger would be to prevent them from encountering Christ by presenting him as an enemy of joy or as someone indifferent to human questions and difficulties," he added.

In a section entitled, "Expanding horizons beyond conflicts," Pope Francis lays forth his call for a transcendence of conflict:

"When this occurs, it is probably that the real response to the challenges of evangelization lies in transcending the two approaches and finding other, better ways, perhaps not yet even imagined.  Conflict is overcome at a higher level, where each group can join the other in a new reality, while remaining faithful to itself," he added.

"Poets, contemplatives and prophets, help free us from the technocratic and consumerist paradigm that destroys nature and robs us of a truly dignified existence," the pope wrote.

The pope also made a point that this apostolic exhortation is addressed "to the whole world," not just to the Amazonian region.

"The equilibrium of our planet ... depends on the health of the Amazon region," he said. "It serves as a great filter of carbon dioxide, which helps avoid the warming of the earth."

Francis' ecological dream for the region encompasses an integral need to protect the human dignity of people living in the region.

"We do not need an environmentalism that is concerned for the biome but ignores the Amazonian peoples," he wrote. "My predecessor Benedict XVI condemned 'the devastation of the environment and the Amazon basin, and the threats against the human dignity of the peoples living in that region.'"

"We cannot allow globalization to become a new version of colonialism," Pope Francis said after apologizing for historic "crimes committed against native peoples during the so-called conquest of America."

Colonization has not ended, Pope Francis said, it has been "changed, disguised and concealed, while losing none of its contempt for the life of the poor and the fragility of the environment."

Pope Francis signed the post-synodal apostolic exhortation on February 2 in the Archbasilica of St. John Lateran, the cathedral of the Bishop of Rome.

"The pastoral presence of the Church in the Amazon region is uneven, due in part to the vast expanse of the territory, its many remote places, its broad cultural diversity, its grave social problems, and the preference of some peoples to live in isolation. We cannot remain unconcerned; a specific and courageous response is required of the Church," Pope Francis said.