Pope Francis Wednesday accepted the resignation of Buffalo's embattled Bishop Richard Malone. The Diocese of Buffalo will be administered by Albany's Bishop Edward Scharfenberger until a permanent replacement for Malone is appointed. 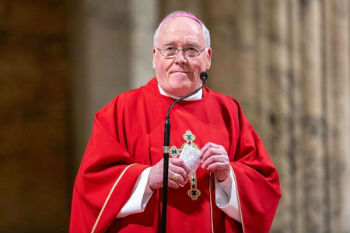 Vatican City, (CNA) - Pope Francis Wednesday accepted the resignation of Buffalo's embattled Bishop Richard Malone. The Diocese of Buffalo will be administered by Albany's Bishop Edward Scharfenberger until a permanent replacement for Malone is appointed.

A Dec. 4 communique from the United States' apostolic nunciature said Malone asked Pope Francis for an "early retirement" during last month's ad limina visit, after being made aware of the results of an apostolic visitation to the Diocese of Buffalo, which concluded at the end of October.

In his own statement Dec. 4, Malone said the results of the apostolic visitation were a factor in his decision to resign, but he is doing so "freely and voluntarily."

"I have concluded after much prayer and discernment that the spiritual welfare of the people of the Diocese of Buffalo will be better served by a new bishop who perhaps is better able to bring about the reconciliation, healing and renewal that is so needed," he said.

"It is my honest assessment that I have accomplished as much as I am able to, and that there remain divisions and wounds that I am unable to bind and heal."

The resignation comes after more than a year of scandal surrounding Malone.

In November 2018, a former Buffalo chancery employee leaked confidential diocesan documents related to the handling of claims of clerical sexual abuse. The documents were widely reported to suggest Malone had covered-up some claims of sexual abuse, an allegation the bishop denied.

Six months later, in April 2019, Malone apologized for his handling of some cases in the diocese, and said he would work to restore trust. The bishop particularly apologized for his 2015 support of Fr. Art Smith, a priest who had faced repeated allegations of abuse and misconduct with minors.

"Lessons have been learned," Malone said in April.

"I personally need to repent and reform, and it is my hope that this diocese can rebuild itself and learn and even grow from the sins of the past. I ask you to pray for me, pray for the Church, and pray for all those who suffered and suffer as a result of abuse as we go forward together to address the worldwide problem of child sexual abuse," the bishop added.

In August 2019, a RICO lawsuit was filed against the diocese and the bishop, alleging that the response of the diocese was comparable to an organized crime syndicate.

In the conversations, Malone seemed to acknowledge the legitimacy of accusations of harassment and a violation of the seal of confession made against a diocesan priest, Fr. Jeffrey Nowak, by a seminarian, months before the diocese removed Nowak from active ministry.

In an Aug. 2 conversation, Malone can be heard saying, "We are in a true crisis situation. True crisis. And everyone in the office is convinced this could be the end for me as bishop."

On Oct. 3, the Apostolic Nunciature in Washington, DC, announced that Bishop Nicholas DiMarzio of Brooklyn had been asked to lead an apostolic visitation - and canonical inspection - of the Buffalo diocese on behalf of the Congregation for Bishops in Rome.

That review concluded at the end of October, with DiMarzio having made three trips to Buffalo, and interviewing more than 80 people before submitting his report to Rome.

Malone visited Pope Francis last month, afterward telling Buffalo Catholics that "in a few words spoken privately to me, it was clear that the pope understands the difficulties and distress we here in Buffalo, and I personally, have been experiencing."

"He was very understanding and kind."

"I ask for your prayers and patience while the path forward is discerned. In the meantime, be assured that I am wholly committed to fostering the healing of victim survivors, rebuilding trust, and with our clergy and other Church ministers, renewing faith and carrying on the essential ministries that serve the needs of Catholics and of the larger Western New York community," Malone said in a Nov. 18 video.

Rumors that Malone would resign surfaced last month, after the bishop' ad limina visit to the pope, required every five years. A diocesan spokesperson said those rumors were false.

When reports emerged again this week that Malone would resign, diocesan personnel did not deny them.

The details of DiMarzio's apostolic visitation have not been released. The visitation did not take place under Pope Francis' recently promulgated norms for investigating bishops accused of negligence or sexual abuse. The Vatican has not suggested that Malone has been formally accused of any particular canonical crime.

In 2014, Pope Francis issued a document, formally called a rescript, noting that in "particular circumstances," the pope "may consider it necessary to ask a bishop to present the resignation of his pastoral office, after letting him know the motives for such a request and after listening attentively to his justifications, in fraternal dialogue."

The document did not establish a new policy, but clarified the freedom of the pope to request the resignation of a bishop. It is not clear whether Francis requested Malone's resignation.

Malone is not the first U.S. bishop to resign amid crisis in recent years. In 2018, mired in scandal surrounding Theodore McCarrick, Cardinal Donald Wuerl asked the pope to accept his 2015 letter of resignation from the Archdiocese of Washington. Francis did so in October 2018, but Wuerl continued to lead the archdiocese until his successor was named in April.

Archbishop John Nienstedt of Minneapolis, along with Bishop Lee Piche, his auxiliary, resigned from office in June 2015, amid reports of systemic negligence, and after criminal charges were filed against the archdiocese for its mishandling of clerical sexual abuse allegations.

Bishop Robert Finn resigned from leading the Diocese of Kansas City-St. Joseph in April 2015. Finn had been convicted in 2012 of a misdemeanor, namely the failure to report suspected child abuse. The bishop was sentenced to two years' probation for that crime.

Malone, 73, began leading the Buffalo diocese in 2012. He was ordained a priest of Boston in 1972, and became an auxiliary bishop in that diocese in 2000, two years before a national sexual abuse scandal emerged in the United States, centered on the Archdiocese of Boston and the leadership of Cardinal Bernard Law. Malone was Maine's bishop from 2004 until 2012.