Marking the feast of St. Andrew the Apostle, Pope Francis sent a message to Patriarch Bartholomew of Constantinople on Saturday, voicing his desire for full communion between the Catholic and Orthodox. 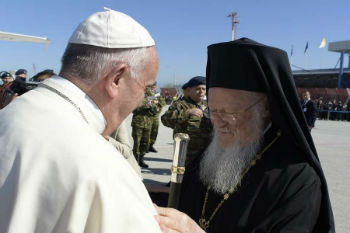 Pope Francis and Patriarch Bartholomew I in Greece

Vatican City, (CNA) - Marking the feast of St. Andrew the Apostle, Pope Francis sent a message to Patriarch Bartholomew of Constantinople on Saturday, voicing his desire for full communion between the Catholic and Orthodox.

"It is with great spiritual joy and in profound communion of faith and charity that I join the prayer of the Church of Constantinople in celebrating the feast of its holy patron, the Apostle Andrew, the first-called and brother of the Apostle Peter," the pope said in his letter.

Leading the Holy See delegation this year was Cardinal Kurt Koch, president of the Pontifical Council for Promoting Christian Unity.

"Through the delegation, I convey the assurance of the unwavering intention of the Catholic Church, as well as my own, to continue in our commitment to working towards the reestablishment of full communion among the Christians of the East and the West," Pope Francis said.

He noted that it has been 40 years since the establishment of the Joint International Commission for Theological Dialogue between the Catholic Church and the Orthodox Church, created by Pope John Paul II and Patriarch Dimitrios I, and he thanked all those who have contributed to the commission over the years.

"The search for the re-establishment of full communion among Catholics and Orthodox is certainly not confined to theological dialogue, but is also accomplished through other channels of ecclesial life," the pope continued.

"Our relations are nourished above all through authentic gestures of mutual respect and esteem," he said. "Such actions show a shared fidelity to the word of our one Lord Jesus Christ, and the will to remain together in his love."

Catholics and Orthodox are already united through their one baptism and the one Holy Spirit guiding them, Pope Francis said.

He also pointed to joint initiatives to share the Gospel and aid the needy, voicing hope that both Catholics and Orthodox would work to "strengthen the daily dialogue of love and life" in these shared projects, and ultimately work toward re-establishing full communion.

"United in prayer to the Apostle Andrew, I renew to you and to all those present my warmest best wishes, and I exchange with you a holy embrace in Christ our Lord," the pope concluded.