Pope Francis: The poor, unborn, and elderly are neglected in the frenzy of modern life

On the World Day of the Poor, Pope Francis said that the poor and most vulnerable can be left behind in the frenetic haste and self-centeredness of the modern world. 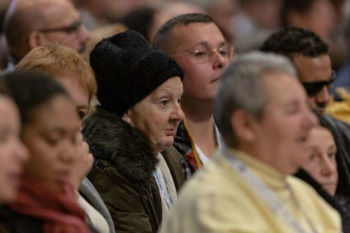 Holy Mass with Pope Francis for World Day of the Poor

Vatican City, (CNA) - On the World Day of the Poor, Pope Francis said that the poor and most vulnerable can be left behind in the frenetic haste and self-centeredness of the modern world.

"How beautiful it would be if the poor could occupy in our hearts the place they have in the heart of God," Pope Francis said in his homily Nov. 17.

"In the frenzy of running, of achieving everything right now, anyone left behind is viewed as a nuisance. And considered disposable. How many elderly, unborn, disabled and poor persons are considered useless," he said in St. Peter's Basilica.

Pope Francis celebrated Mass for the 3rd annual World Day of the Poor with the theme "the hope of the poor will never be disappointed."

"Amid so many penultimate and passing realities, the Lord wants to remind us today of what is ultimate, what will remain forever. It is love, for 'God is love,'" he said.

Pope Francis warned that there is a great temptation in today's world to try to know and to do everything "right now" that can cause one to lose sight of what is most important: "We no longer find time for God or for our brother and sister living next door."

"How often do we let ourselves be seduced by a frantic desire to know everything right now, by the itch of curiosity, by the latest sensational or scandalous news, by lurid stories, by the screaming those who shout loudest and angriest, by those who tell us it is 'now or never,'" Pope Francis said.

"To us, these are front page news, but the Lord puts them on the second page," he said. "That which will never pass away remains on the front page: the living God, infinitely greater than any temple we build for him, and the human person, our neighbor, who is worth more than all the news reports of the world."

The pope explained that the antidote to frantic haste is the Christian virtue of perseverance.

"Perseverance entails moving forward each day with our eyes fixed on what does not pass away: the Lord and our neighbor," he said. "Let us ask that each of us, and all of us as Church, may persevere in the good and not lose sight of what really counts."

Following the Mass and Angelus prayer, Pope Francis will share a free lunch with nearly 1,500 poor people invited to dine in the Paul VI Hall and nearby colleges. A medical clinic set up in St. Peter's Square also offered free medical services to those in need in the week preceding the World Day of the Poor.

Pope Francis made a surprise visit to the medical clinic Nov. 15 and announced the creation of a new 4-story homeless shelter right off the St. Peter's Square colonnade, which he called "the Palace of the Poor."

The homeless shelter, staffed by the Sant'Egidio community, will have two floors of dormitories that can sleep 50 men and women, a kitchen to provide breakfast and dinner, and a recreation area for fellowship, educational programs, and psychological counseling.

"The poor person who begs for my love leads me straight to God," Pope Francis said.

In his Angelus address, the pope thanked Catholics in dioceses and parishes around the world for their work in solidarity with the poor, which he said gives hope to the most disadvantaged.

"The Lord calls us to collaborate in the construction of history, becoming, together with Him, peacemakers and witnesses of hope in a future of salvation and resurrection," he said.

Pope Francis established  the World Day of the Poor at the end of the Jubilee Year of Mercy in 2016. It is celebrated each year on the 33rd Sunday of Ordinary Time, one week before the Feast of Christ the King.

"The poor facilitate our access to heaven: this is why the sense of the faith of God's People has viewed them as the gatekeepers of heaven," Pope Francis said in his homily.

"Even now, they are our treasure, the treasure of the Church," he said. "For the poor reveal to us the riches that never grow old, that unite heaven and earth, the riches for which life is truly worth living: the riches of love."