Religion should transmit 'values and virtues' to next generation, pope says

Pope Francis spoke Thursday about education as a path to peace, saying that if people of faith do not transmit concrete values to young people, the message will get stuck in the incomprehensible abstract. 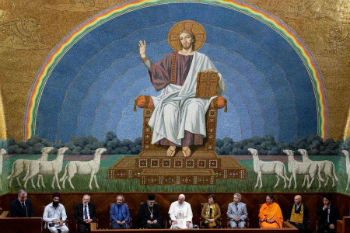 Speakers at the day of study included representatives of all the major world religions: Buddhism, Taoism, Sikh, Hinduism, Islam, Orthodoxy, Evangelicalism, and Catholicism, as well as the Waldensian Evangelical Church

Vatican City, (CNA) - Pope Francis spoke Thursday about education as a path to peace, saying that if people of faith do not transmit concrete values to young people, the message will get stuck in the incomprehensible abstract.

"The responsibility towards the new generations requires above all the commitment to form them and listen to them in order to respond to the challenges of our times, without denying the immutable value of truth, but with a comprehensible and current language," the pope said Oct. 31.

Speaking at an interreligious event at the Pontifical Lateran University, he stated that "many times we too, women and men of faith, limit ourselves to giving indications rather than transmitting the experience of values and virtues."

"And so, in the face of conflicts and the need to build peace, we do not realize that our message is likely to be abstract and remain unheard," he added.

Pope Francis spoke at the conclusion of an event called "Education, Human Rights, Peace: Instruments of international action and the role of religions."

Speakers at the day of study included representatives of all the major world religions: Buddhism, Taoism, Sikh, Hinduism, Islam, Orthodoxy, Evangelicalism, and Catholicism, as well as the Waldensian Evangelical Church.

The pope emphasized that just to criticize the past or the present is not helpful to the goal of creating a more peaceful future for the world. He added: "it is necessary to show creativity and proposals for the future."

Instead of conditioning the future path of youth people, solutions should be sought for how to provide them with the tools to overcome conflicts, he said.

Francis underlined the importance of dialogue, saying, "dialogue does not only serve to prevent and resolve conflicts, but it is a way to bring out the values and virtues that God has written in the heart of every man and has made evident in the order of creation."

The pope was also present at the university for the inauguration of an exhibit by Othman Al-Khuzaiem, an artist from Saudi Arabia.

The exhibit, on display through Nov. 21, is called "Calligraphy for Dialogue. Promoting the Culture of Peace through Culture and Art," and is dedicated to the memory of Cardinal Jean-Louis Tauran, who died in July 2018.

Cardinal Tauran was the president of the Pontifical Council for Interreligious Dialogue from 2007 until his death. He visited Saudi Arabia in April 2018 as an official of the Holy See.

Pope Francis pointed to the paintings in the exhibit as "tools to open paths of peace, to recall rights, and to make the person the center of every action and every educational project."

Cardinal Tauran, he continued, was a peacemaker and a man of dialogue, "above all dialogue with God."

As a Holy See diplomat, he also devoted himself to interreligious dialogue and dialogue between peoples and governments, the pope said.

"My thanks go to those who have contributed to this initiative," he continued. "To all I address the invitation to pray without ceasing and to make every effort so that through an authentic Global Educational Pact we can inaugurate an era of peace for the entire human family."

The Oct. 31 day of study was one of several events being put on in preparation for Pope Francis' initiative, announced in September, to form an international and interreligious alliance to serve as a "global village" for the education of children and to promote care for the earth.

The focal point of the initiative will be an event hosted at the Vatican on May 14, 2020 on "Reinventing the Global Educational Alliance," which "the most significant personalities of the political, cultural and religious world" will be invited to attend, Francis announced.

The 2020 event is spearheaded by the Congregation for Catholic Education, which said the goal is "to raise awareness and a wave of responsibility for the common good of humanity, starting from the young and reaching all men of good will."