Pope Francis prays for stability in Iraq amid deadly protests

Pope Francis prayed Wednesday for Iraq, where 18 more people were killed and hundreds wounded Oct. 29 during political protests in Karbala. 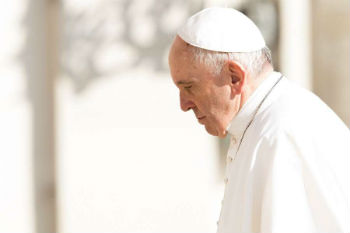 "My thoughts turn to beloved Iraq, where protests during this month have caused numerous deaths and injuries," the pope said during the general audience Oct. 30.

"I pray that those battered people will find peace and stability after so many years of war and violence, where they have suffered so much."

There have been numerous anti-government protests across Iraq this month, with the last wave beginning Oct. 25. Since the beginning of the protests, government forces have used tear gas and bullets against protesters.

At least 88 protesters have been killed in the last five days and around 149 protesters died earlier this month, according to AP.

Protests are largely in response to government corruption and a lack of economic growth and proper public services. Protesters are calling for reform and for the resignation of the Iraqi government.

At his audience in St. Peter's Square Oct. 30, Pope Francis expressed his condolences for the wounded, for all those who have died and for their families, adding that he invites the Iraqi authorities "to listen to the cry of the population that asks for a dignified and peaceful life."

"I urge all Iraqis, with the support of the international community, to pursue the path of dialogue and reconciliation and to seek the right solutions to the challenges and problems of the country," he said.

In his message for the audience, the pope reflected on the Acts of the Apostles chapter 16, when St. Paul experiences a vision in which a Macedonian begs him to "come over to Macedonia and help us."

"The Apostle has no hesitations, he leaves for Macedonia, sure that it is God himself who sends him," Francis said.

He explained that in this part of the Acts of the Apostles, when St. Paul stays in Philippi, a Roman colony in Macedonia, there are three important events which take place.

In each of these, "we see how the Holy Spirit is the protagonist of the Church's mission: it is he who guides the path of the evangelizers showing them the way to follow," the pope said.

After Lydia's conversion and baptism, she invites Paul and Silas into her home. With Christianity's arrival in Europe, he said, there is "the beginning of a process of inculturation that endures even today."

Pope Francis explained these episodes in terms of consolation and desolation. This moment with Lydia was a moment of receiving the Holy Spirit's consolation, he said. When Paul and Silas are beaten and thrown into prison, they pass from consolation to a moment of desolation.

They were thrown into prison because they freed a slave girl from possession to an evil spirit which gave her the power of "fortune-telling." After the exorcism, her master was angered that he could no longer earn a profit people who paid to have their fortune told by her.

The pope noted that even today there are people who will pay to have their palms read or to tell them their fortunes, something he witnessed as the archbishop of Buenos Aires in Argentina. "People believe in these things. And pay," he said.

But in prison, instead of giving in to desolation, Silas and St. Paul pray and praise God with song, he said, "and this praise releases a power that liberates them: during the prayer an earthquake shakes the foundations of the prison, the doors are opened and everyone's chains fall off."

The jailer is going to kill himself, because the prison guards are supposed to pay with their lives if the prisoners escape, but Paul shouts out, "Do no harm to yourself; we are all here."

Then, a miracle happens, Francis said. The guard asks what he must do to be saved, and the answer of Silas and St. Paul is: "Believe in the Lord Jesus and you and your household will be saved."

The two men preach the Gospel to the jailer and his family, who welcome them into their home and wash their wounds, and later receive baptism.

"In the heart of the night of this anonymous jailer, the light of Christ shines and defeats darkness: the chains of the heart fall off and a joy never felt in him and in his family blossoms," Francis said. "Thus the Holy Spirit began the mission."