Fr. Giacomo Costa, a communications official for the Amazon synod, said Wednesday a wooden figure of a nude pregnant woman, which has been present at events related to the synod, is not the Virgin Mary, but is instead a female figure representing life. 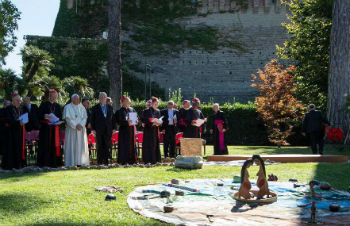 Vatican City, (CNA) - Fr. Giacomo Costa, a communications official for the Amazon synod, said Wednesday a wooden figure of a nude pregnant woman, which has been present at events related to the synod, is not the Virgin Mary, but is instead a female figure representing life.

"It is not the Virgin Mary, who said it is the Virgin Mary?" Costa said Oct. 16 at a press conference for the Amazon synod, a meeting taking place in the Vatican Oct. 6-27 on the ministry of the Church in the region.

Costa referred to a controversial image of a female figure which was part of a tree-planting ceremony in the Vatican Oct. 4. The same figure has been present in the vicinity of the Vatican at various events happening during the synod, under the "Casa Comun" initiative.

The wooden figure of a pregnant woman has been described as both a Marian image and as a traditional indigenous religious symbol of the goddess Pachamama, or Mother Earth.

When told "many people have said" the woman is a figure of the Virgin Mary, Costa added "'many have said,' okay, as you like, but I have never heard that."

"There is nothing to know. It is an indigenous woman who represents life," he stated, adding that his information commission will look for more information about it, but "it is a feminine figure" and is "neither pagan nor sacred."

Paolo Ruffini, prefect of the Vatican communications dicastery, said Wednesday he sees the figure as "representing life."
"Fundamentally, it represents life. And enough. I believe to try and see pagan symbols or to see... evil, it is not," he said, adding that "it represents life through a woman." He equated the image to that of a tree, saying "a tree is a sacred symbol."

Ruffini said that interpretation is his personal opinion, and he was not speaking as the head of Vatican communications or synod communications.

He added that "We know that some things in history have many interpretations" and he would look for more information about the image and inform journalists about what he finds out.

Cristiane Murray, vice director of the Holy See press office, added that more information about the wooden figure should be sought from REPAM or the organizers of the events where the image has been present.

REPAM (the Pan-Amazonian Ecclesial Network), a group backed by the bishops' conferences in Latin America, describes itself as an advocacy organization for the rights and dignity of indigenous people in the Amazon. The network is involved in operations for the synod assembly and is one of 14 groups on the organizing committee of the Casa Comun initiative, which is promoting more than 115 events hosted by a loose network of groups, connected in varying degrees to the Catholic Church.