'Every page was an act of prayer': New manuscript reveals devotion of St. John Paul II

Newly published manuscripts belonging to Karol Wojtyla have offered a glimpse into the future pope and saint's deep devotion and prayer throughout his writing process. 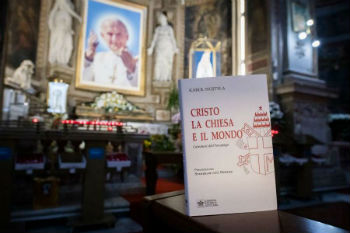 Vatican City, (CNA) - Newly published manuscripts belonging to Karol Wojtyla have offered a glimpse into the future pope and saint's deep devotion and prayer throughout his writing process.

The 39 handwritten pages contain Wojtyla's reflections on St. Paul's Areopagus address to the Athenians described in the Acts of the Apostles. It is believed that these meditations and catecheses were written in or shortly after 1965, while Wojtya was Archbishop of Krakow. He was made a cardinal in 1967 and elected pope in 1978.

On each page, Wojtyla wrote a little prayer in Latin on the top right corner, such as "Veni, Sancte Spiritus" (Come Holy Spirit) and "Adoro te devote latens Deitas" (I devoutly adore you hidden God), a Eucharistic Hymn written by St. Thomas Aquinas.

On the top of the first page he wrote, in Latin, the full quote of St. Louis de Montfort from which he had taken his episcopal motto, Totus Tuus: "I belong entirely to you, and all that I have is yours. I take you for my all. O Mary, give me your heart."

The writings have been published in a book titled "Christ, the Church and the World: Catechesis of the Areopagus."

Speaking at the launch of the publication, Cardinal Giovanni Battista Re reflected that the inscription of a prayer on each page was a discipline Wojtyla continued as pope, even while drafting encyclicals.

"When he wrote Redemptoris Hominis, before every page, before the beginning, he wrote in Latin: 'Totus Tuus Ego Sum,' The second page: 'Et omnia mea tua assunta,' like this he continued," Re said.

Cardinal Re worked with St. John Paul II as sostituto, or deputy, at the Secretariat of State from 1989 - 2000 and later as the prefect of the Congregation of Bishops. He said that when the Polish pope wrote Redemptoris Mater about the Virgin Mary, he wrote out the Litany of Loreto with a different title of Mary on each subsequent page.

"That's why, in a certain sense, every page that he wrote it was an act of prayer," Re said in Italian. "It reveals to us a little of  ... the great spirituality, devotion that he had."

Re said he was always impressed with the "intensity" of St. John Paul II's prayer: "He had a great capacity for concentration. When he gathered himself for prayer whatever happened around him did not disturb him. He was so immersed in God, so concentrated on God."

The retired cardinal remembered that when faced with a decision or problem, the pope would respond, "We need to pray more about this."

The manuscripts were first published in Polish in 2018 to mark the 40th anniversary of Wojtyla's election as Archbishop of Krakow. No decision has yet been made about publication in English or Spanish.

Wojtyla began writing the meditations on St. Paul's speech at the Areopagus following two trips to Athens in the mid-1960's. Within the text, he references documents from Vatican Council II, including Nostra Aetate, Dei Verbum, and Gaudium et Spes.

Dr. Marta Burghardt, who conducted historical and philological analysis of the original manuscripts, concluded that the Wojtyla wrote several passages of conciliar texts and Scripture from memory.

Burghardt said it is still unknown to whom, if anyone, Wojtyla was writing these reflections on St. Paul or whether they were intended for a series of speeches or publication.

"The depth of these texts perfectly reflects his extraordinary conception of the world from the point of view of communion with the Father, the Son and the Holy Spirit," Cardinal Stanislaw Dziwisz wrote in the introduction to the book, published by the Vatican library. Dziwisz served as St. John Paul II's personal secretary throught his time as a bishop and pope.

"In this particular historical moment we all feel again the need for a profound and general catechesis on the truths of the faith, of a catechesis that completely introduces us into the mystery of God's work in our human history," Dziwisz said.