A contributor to the working document for the Vatican's Synod of Bishops on the Amazon region made his case Wednesday for the priestly ordination of married men in the region. 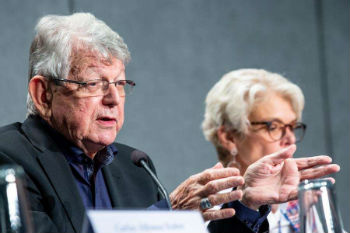 Vatican City, (CNA) - A contributor to the working document for the Vatican's Synod of Bishops on the Amazon region made his case Wednesday for the priestly ordination of married men in the region.

"I'm saying this with great sincerity - there is no other option," Bishop Erwin Krautler, the retired head of the Xingu prelature in Amazonian Brazil, said at a Vatican press briefing Oct. 9.

"The indigenous people do not understand celibacy," Krautler added. "For them, at least those I have met... they can not understand this thing that a man is not married, that he does not have a woman taking care of the house, of the home."

The bishop added that he was often the object of suspicion or pity when he explained to indigenous communities that he did not have a wife, and he joked that he sometimes found it easier to say that his wife was "far away from here."

Krautler, 80 and a native of Austria, was part of the committee that developed the instrumentum laboris, or working document, for the October meeting of bishops. That document has been the subject of criticism by some bishops, who say it is not reflective of Catholic teaching on several key points.

The bishop said that he had raised the issue of priestly celibacy to Pope Francis in 2015, during preliminary discussions regarding a meeting of bishops to discuss the Amazon.

"There are thousands of communities in the Amazon that don't have the Eucharist except for one, two, three times a year. These people are practically excluded from the Church," he said.
"What we want is that our brothers and sisters don't have just the table for the Word, but also for the Eucharist."

"In our opinion, celibacy is about the Eucharist," Krautler added.

"There is also another aspect: Two-thirds of these communities who are priestless are coordinated and directed by women," the bishop said, calling for the synod, and the Church, to consider whether women could be ordained as deacons in the region.

"So, what do we do? We have to think about this. We hear a lot about enhancing the role of women; what does it mean? What are we going to tell her? 'Yes, you are a person, you are very good'...but then we need concrete solutions."

The Catholic Church teaches that it is unable to ordain women to the priesthood, which was conferred by Jesus Christ upon his apostles, who were men. Pope Francis appointed a commission in 2016 to examine the possibility of women serving in some diaconal role, with or without the sacrament of ordination, but the group has not reached a consensus and the pope said in May that no plan will be forthcoming on the question.

At the press conference, Krautler grew animated while he spoke about his efforts to advance his agenda, noting that "politics is the art of fighting for the common good," and explaining that his experiences in the Amazon have shaped his theological vision.

Paolo Ruffini, the Vatican's communications head, explained at the briefing that the synod's discussion about the possibility of ordaining married men has focused on making exceptions to the Church's canon law regarding celibacy and the priesthood in "concrete cases," but not on changing the universal law altogether.

Ruffini added that some synod participants have said that the lack of priests in the Amazon region is not caused by the obligation of priestly celibacy and that the Church must pray for vocations and strengthen priestly formation in the region.

CNA reported Oct. 8 that Cardinals Robert Sarah and Peter Turkson, as well as several bishops from Brazil, Peru, and Bolivia, have urged from the synod floor maintaining the Church's discipline of priestly celibacy in the Amazon region.

Father Giacomo Costa, SJ, another participant in the synod, said at the press briefing that many synod participants have focused their remarks on expanded roles for laity, and on providing formation for those already in leadership roles. Costa said that the Church could more publicly recognize the "personal charisms" of lay people, and their experience of leadership in the Church.

Synod fathers have also discussed the importance of greater ecological awareness among Catholics, decrying "savage capitalism" in the region, Ruffini said, and calling for new models of development that utilize technology for ecologically responsible economic growth.

The Synod of Bishops on the Amazon is a meeting of bishops and advisors, convened at the Vatican to discuss ecological, political, and pastoral issues for the Church in the Amazon region, which spans across nine countries in South America. The meeting began Oct. 6 and will conclude Oct. 27. Subsequent to the meeting, the pope is expected to issue a document on the region.