An advertising company has apologized for displaying a pro-life billboard in the United Kingdom, saying it is removing the ad and will make a donation to a pro-abortion charity. 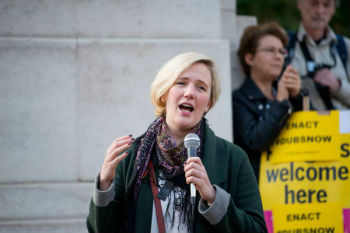 London, England, (CNA) - An advertising company has apologized for displaying a pro-life billboard in the United Kingdom, saying it is removing the ad and will make a donation to a pro-abortion charity.

The billboard was erected in Walthamstow, East London, as part of the #StopStella campaign. The campaign is in reference to local Labour MP Stella Creasy, the leader of a movement to force legal abortion on Northern Ireland later this month. Creasy is now pushing to fully legalize abortion throughout the United Kingdom via amendments to the Domestic Abuse Bill.

The organization the Centre for Bioethical Reform UK paid for the 20-foot billboard, which featured a picture of Creasy next to an image of a baby who was aborted at 24-weeks gestation. The billboard read "Your MP is working hard.... To make this a human right."

Clear Channel, the company that produced the billboard, issued an apology and pledged to donate the money they were paid for the advertisement to Abortion Support Network. The apology followed a series of tweets by Creasy about a seperate billboard from the same campaign which appeared overnight Sept. 30.

Twitter-can you get me the CEO of @CCUK_Direct advertising? how much did you get for this crap? @metpoliceuk still think this is just 'free speech' and not harassment of women in walthamstow? Am sorry for the graphic images and @patel4witham am reaching out to you for help now. pic.twitter.com/rOG7Gc3App

- stellacreasy (@stellacreasy) September 30, 2019In addition to calling out the company, the MP asked to Metropololitan police to invesitgate the ads as "harassment."

Centre for Bioethical Reform UK, which is the UK branch of the Center for Bio-Ethical Reform, said that the aim of the billboard was to inform the people of Walthamstow about "the humanity of the unborn child and the reality of abortion."

The United Kingdom has different free speech laws than the United States, including on sensitive issues such as abortion. Several jurisdictions in the UK have worked to enact so-called "buffer zone" laws that prevent pro-life activists from demonstrating near abortion clinics. The U.S. Supreme Court ruled unanimously in 2014 that similar legislation in America was unconstitutional.

The Center for Bio-Ethical Reform is known for their controversial "genocide awareness project" that displays images of aborted children on large banners, in public view. In the U.K., the CEO of the Center for Bioethical Reform UK was arrested in 2010 for protesting with similar banners.

The Democratic Unionist Party, the largest party in the Northern Ireland Assembly and a member of the coalition government in Westminster, is opposed to changing the region's abortion law.

Bills to legalize abortion in cases of fatal fetal abnormality, rape, or incest failed in the Northern Ireland Assembly in 2016.

In her Oct. 3rd decision, Justice Siobhan Keegan said that the law violated the U.K.'s human rights legislation. She, however, declined to make a formal declaration of incompatibility, due to the fact that there is already legislation in place that would make abortion legal in Northern Ireland in the near future.

A bill was passed in July by the British parliament that will make both abortion and same-sex marriage legal in the region if a devolved government is not formed by Oct. 21.