In his opening remarks for the Amazon synod Monday, Pope Francis said the assembly's working document is meant to be "destroyed" as the starting point of the work of the Holy Spirit, who he prays will guide the synodal process. 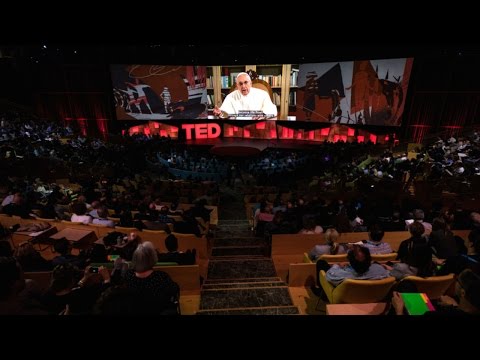 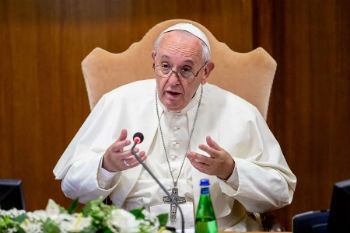 Pope Francis speaks at the opening of the Amazon synod Oct. 7 2019

Vatican City, (CNA) - In his opening remarks for the Amazon synod Monday, Pope Francis said the assembly's working document is meant to be "destroyed" as the starting point of the work of the Holy Spirit, who he prays will guide the synodal process.

"Synod is to walk together under the inspiration and guidance of the Holy Spirit," the pope said inside the Synod Hall Oct. 7. "The Holy Spirit is the main actor of the synod. Please, let's not throw it out of the room."

Pope Francis, speaking in Spanish, explained that in the two years leading to this point there have been consultations and discussions within bishops' conferences and at the pre-synodal council to create the synod's working document.

The working document, called the Instrumentum laboris, "is a martyr text destined to be destroyed, because that is where it is as a starting point for what the Spirit will do in us," he stated.

Francis asked for those present "to pray a lot" to ensure the work of the Holy Spirit is fruitful: "Reflect, dialogue, listen with humility..." he added.

The Synod of Bishops on the Pan-Amazonian region is taking place at the Vatican Oct. 6-27. Bishops, priests, lay experts, and religious men and women, are meeting to discuss issues of importance to the Church in the Amazon, including a lack of priestly vocations, ecological challenges, and obstacles to evangelization.

The three-week gathering began Oct. 7 with a procession from St. Peter's Basilica to the Vatican's Pope Paul VI hall, where people prayed together before the bishops and other Amazon synod participants entered the synod hall for morning prayer and the pope's opening address.

Giving his reflections on what a synodal process should look like, Pope Francis said it requires care like that of a newborn baby. "They need warmth of community, they need warmth from Mother Church. An ecclesial process grows like this."

He said an atmosphere of fraternity and respect is needed, as well as "the air of intimacy... It is about not ventilating everything outside as it comes."

This is about "delicacy and prudence in communication," he said, and not about "a secret more typical of [Masonic] lodges than of the ecclesial community."

The pope said there will be press briefings and other services for the journalists, whose job it is to communicate, but added that the process of a synod "can be ruined a little" if people express their opinions outside the room.

He criticized what he called "the synod inside and the synod outside," which he said has occurred during some synod assemblies.

"The synod inside that follows a path of Mother Church, of care of the processes. And the synod of the outside that by an information given with lightness, given with imprudence, moves the informants ex officio to mistakes."

Pope Francis said the purpose of the synod is not the invention of social programs or pastoral actions "with the same non-contemplative style."

For this reason he is continuing a practice he started at the youth synod in 2018: there will be four minutes of silence after every four speeches, which are called interventions, to give time for internal reflection.

He said that someone commented to him that it is dangerous to have silence because the synod participants will fall asleep, but he joked that the opposite occurred at last year's synod on young people: "they tended to fall asleep during the interventions, at least on some, and they woke up in the silence."

The pope asked for the bishops and other Amazon synod participants to have a pastoral heart toward the people living in the Amazon.

"Approach on tiptoe, respecting their history, their cultures, their style of 'buen vivir,' in the etymological sense of the word, not in the social sense that we often give it," he said.

He condemned "ideological colonization" and the desire by some to "domesticate native peoples," expressing sorrow for times when the Church did this, when it "was not inculturized."

"The homogenizing and homogenizing centralism did not let the authenticity of the culture of the peoples emerge," he said. "Ideologies are a dangerous weapon. We always tend to grab an ideology to interpret a people. Ideologies are reductive and lead us to exaggeration in our claim to understand intellectually, but without accepting. Understand without admiring."

The pope said he was sad to hear a "mocking comment" about a man who carried one of the gifts at the offering of the opening Mass of the synod Oct. 6. The man was wearing a head dress with feathers.

"Tell me: what is the difference between wearing feathers on the head and the tricorne used by some officials of our dicastery?" Francis asked, adding that he wants the bishops to look beyond the proposal of "pragmatic measures" to take a more "paradigmatic perspective."

The Church is not about "a majority," nor is it "sensationalist," he stated.