An important aspect of the Christian life is obeying God even when there may be consequences for going against the commands of others, Pope Francis said during the general audience Wednesday. 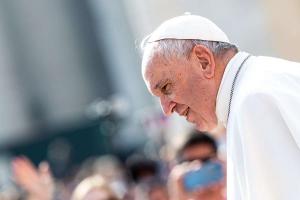 Vatican City, (CNA) - In the Acts of the Apostles, Peter offers "a key to the Christian life: 'To obey God instead of men,'" the pope said Aug. 28, adding that "it is the great Christian response."

"This means listening to God without reservations, without postponements, without calculations," he said. "Adhere to him to become capable of covenant with him and with those whom we meet on our way."

Continuing his weekly catechesis on the Acts of the Apostles, Pope Francis commented on a passage in chapter five, when the apostles are teaching and performing "signs and wonders" among the people.

In Acts 5:14-15 it says "more than ever, believers in the Lord, great numbers of men and women, were added to them" and they were bringing their sick out into the streets, "so that when Peter came by, at least his shadow might fall on one or another of them."

The pope pointed out that Peter, filled with the Holy Spirit, only has to pass by and even "his shadow becomes a 'caress' ... an outpouring of the tenderness of the Risen One who bends over the sick and restores life, salvation, dignity."

This is one way God manifests his closeness, he said. This is what it means to be a witness, manifesting Christ "both with words and with bodily presence."

The sick and disturbed were all healed at the hands of the apostles. Francis emphasized this aspect, explaining that the sick "are privileged for the Church, for the priestly heart, for all the faithful."

"They are not to be discarded, on the contrary, they are to be treated, to be looked after: They are the object of Christian concern," he said.

What follows in Acts, Francis said, is that "Peter's healing action arouses the hatred of the Sadducees, [arouses] envy, [they] imprison the apostles and, upset about their mysterious liberation, forbid them to teach."

The hearts of the Sadducees were hard, he said, and they did not want to believe what they had seen â€" the healings and the apostles' miraculous release from prison at the hands of an angel.

The apostles were then brought for questioning before the high priest, who said: "We gave you strict orders [did we not?] to stop teaching in that name. But Peter and the apostles said in reply, 'We must obey God rather than men.'"

Pope Francis said: "We also ask the Holy Spirit for the strength not to be frightened before those who command us to keep quiet, who slander us and even attack our lives."

"Let us ask him to strengthen us inwardly to be certain of the loving and consoling presence of the Lord by our side."

At the end of the general audience, the pope noted the Aug. 28 feast day of St. Augustine.

"Today we celebrate the memory of Saint Augustine, Bishop and Doctor of the Church," he said. "I invite everyone to be inspired by his holiness and his teaching. Together with him, rediscover the way of interiority that leads to God and to the neighbor most in need."