Understanding the liturgy can be transformative, Cardinal Parolin says

A better understanding of the meaning and symbolic language of the Church's liturgy, especially the Mass, will help Catholics encounter the Lord and grow in holiness, Cardinal Pietro Parolin said in a letter this week. 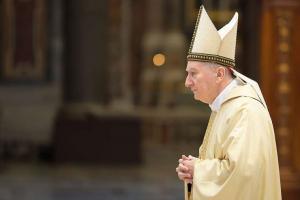 Vatican City, (CNA) - "Concretely, it is a matter of helping communities to better internalize the prayer of the Church, to love it as an experience of encounter with the Lord and with brothers and, in light of this, to rediscover its contents and observe its rites," the cardinal said.

The liturgy will be "capable of forming and transforming those who participate in it," Parolin added, "if these, pastors and laity, will learn ever better to grasp its meaning and symbolic language, including art, song and music in the service of the mystery celebrated, including even the silence."

Parolin, Vatican Secretary of State, spoke about liturgical formation and holiness in a letter for the 70th National Liturgical Week, the theme of which is "Liturgy: call for all to baptismal holiness."

The letter was sent to Bishop Claudio Maniago, bishop of Castellaneta, Italy, and president of the Centro di Azione Liturgica (Center of Liturgical Action), which is holding a conference in Messina Aug. 26-29.

Referencing Pope Francis' address to the Congregation for Divine Worship in February, Parolin argued in the letter that Mystagogy is the ideal way "to spread in the People of God the splendor of the living mystery of the Lord, which is manifested in the liturgy."

Helping Catholics to know the irreplaceable role of the liturgy in and for the Church, is a precious task, he said. Parolin also noted Pope Francis' desire to bring attention to the universal call for holiness through his 2018 apostolic exhortation Gaudete et Exsultate.

The pope, he said, hopes the week's reflections on liturgy will lead to a growth in the awareness of the liturgy as a "privileged place in which the holiness of God draws us to himself with its beauty, its truth, and its goodness."

Quoting a former address of Pope Francis, Parolin said the Second Vatican Council teaches that "Christ is always present in his Church, and in a special way in liturgical actions."

In "the fulfillment of this great work, with which a perfect glory is rendered to God and men are sanctified, Christ always associates the Church with himself, his beloved spouse, who invokes her as his Lord and through him renders worship to the eternal Father," he wrote.

Parolin noted the Council Fathers' insistence that the liturgy, "in the moment in which it celebrates holiness, sanctifies those who participate in it and in this way glorifies the holy and ineffable Name."

In liturgy, he said, God's transcendence, omnipotence, and holiness, is shown, but "in continuity with the Incarnation, the â€~divine Majesty' is offered in proximity to man."

This happens particularly in the Eucharist, he said. "In the liturgy, the inaccessible holiness of God becomes tangible proximity in Christ and in him agape, the gratuitous love that the Father pours into the hearts of believers through the gift of the Spirit, is presented and communicated with the face of mercy."

"The theme of sanctity immediately and directly invokes the liturgy."