Pope Francis has given his encouragement to a committee created by the United Arab Emirates for the promotion of his joint statement on human fraternity, signed in Abu Dhabi in February. 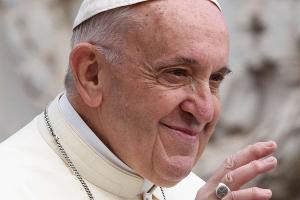 Vatican City, (CNA) - Through spokesman Matteo Bruni, Pope Francis said that though "evil, hatred and division often make news, there is a hidden sea of goodness that is growing and leads us to hope in dialogue, reciprocal knowledge and the possibility of building, together with the followers of other religions and all men and women of good will, a world of fraternity and peace."

Bruni added that the pope encouraged the committee's effort to spread knowledge of the fraternity document and he thanked the United Arab Emirates for "the concrete commitment shown on behalf of human fraternity."

The United Arab Emirates has formed a Higher Committee to work toward goals noted in the joint statement signed by Pope Francis and the Grand Imam of al-Azhar Ahmed el-Tayeb Feb. 4 during Francis' trip to Abu Dhabi, the capital of the UAE.

The statement, titled "A Document on Human Fraternity for World Peace and Living Together," invited "all persons who have faith in God and faith in human fraternity to unite and work together..."

According to a press release by the Higher Committee, the Abu Dhabi declaration is "a common declaration of commitment to unite humanity and work for world peace to ensure that future generations can live in a climate of mutual respect and healthy coexistence."

The new committee is one of several initiatives taken by the UAE during what they have proclaimed the "Year of Tolerance."

The committee is made up of both Muslim and Catholic members. The Catholic members are Fr. Yoannis Lahzi Gaid, the personal secretary of Pope Francis, and Archbishop Miguel Angel Ayuso Giuxot, president of the Pontifical Council for Interreligious Dialogue.

Archbishop Giuxot, in an interview with Vatican News Aug. 26, called the creation of the committee a "significant act" with a "noble" objective.

To a question of whether the Abu Dhabi document's promotion of dialogue could slip into syncretism, Giuxot replied that while he respects those who may think that, he believes "fear is the number one enemy of interreligious dialogue."

"The Catholic Church recalls the value of its own identity, of the courage of otherness and the sincerity of intentions," he continued. "It is not a matter of making a 'melting pot' in which all religions are considered equal, but that all believers, those who seek God and all people of good will without a religious affiliation, have equal dignity."

"I think the Abu Dhabi declaration is a global appeal to the 'civilization of love' which contrasts with those who want a clash of civilizations!" the archbishop said.

"Prayer, dialogue, respect and solidarity are the only winning weapons against terrorism, fundamentalism and all kinds of war and violence," he added. "And they are weapons that are part of the spiritual arsenals of all religions. Peace is a precious asset, an aspiration that lives in the heart of every man, believer or non-believer, and that should inspire every human action."