The way to heaven is difficult and the gate to enter small, but Jesus' mother, Mary, who herself entered through the narrow gate, will help those who ask, Pope Francis said Sunday. 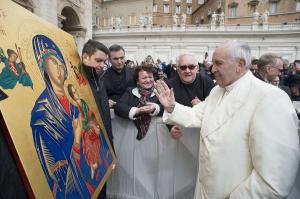 Vatican City, (CNA) - Mary can be invoked under the title "Gate of Heaven," he explained in his Angelus address Aug. 25.

"She welcomed [Jesus] with all her heart and followed him every day of her life, even when she did not understand, even when a sword pierced her soul."

The Blessed Virgin Mary is "a gate that exactly follows the form of Jesus: the gate of the heart of Jesus, demanding, but open to all," he said. "May the Virgin Mary help us in this."

Pope Francis reflected on the day's Gospel passage from Luke, when someone asks Jesus, "Lord, will only a few people be saved?"

This was a highly debated issue at the time, Francis said, and with his answer, Jesus turns the question "upside down." Instead of focusing on the number of people who get to heaven, he speaks of the path to heaven, and how many will choose to follow it.

Using the present tense, Jesus invites people to take personal responsibility, saying, "Strive to enter through the narrow gate, for many, I tell you, will attempt to enter but will not be strong enough."

"With these words, Jesus makes it clear that it is not a question of numbers, there is no â€~closed number' in Paradise! But it is a question of going through the right passage, which is there, for everyone, but it is narrow," Francis said.

He explained that Jesus does not deceive people; he does not say that the way to heaven is a big, beautiful highway with a large door at the end, to not worry.

"No, Jesus tells us things as they are: the passage is narrow," he said.

"In what sense? In the sense that to be saved one must love God and one's neighbor, and this is not comfortable! It is a â€~narrow door' because it is demanding, it requires commitment, indeed, â€~effort,' that is a determined and persevering will to live according to the Gospel.

"For us Christians, this means that we are called to establish a true communion with Jesus, praying, going to church, approaching the Sacraments and nourishing ourselves with his Word," he explained.

"This keeps us in faith, nourishes our hope, revives charity," he continued. "And so, with the grace of God, we can and must spend our lives for the good of our brothers, fight against every form of evil and injustice."

After the Angelus, Pope Francis spoke about the ongoing fires in the Amazon, saying "that forest lung is vital to our planet."

"We pray that, with everyone's commitment, they may be tamed as soon as possible," he said.

Francis also greeted the community of the Pontifical North American College (NAC), the American seminary in Rome, especially, he said, the new group of seminarians who arrived this month to begin their studies. U.S. seminarians studying at the NAC usually stay four to five years.