Vatican diplomat: Solidarity must be at the heart of the European project

The Vatican Secretary for Relations with States said Wednesday that politics surrounding migration in Europe fuel ideological conflicts that do not fully take into account the complexity of the problem. 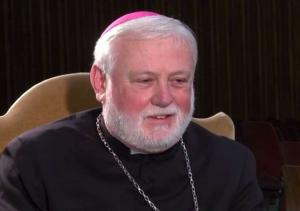 Rimini, Italy, (CNA) -  "I believe it is clear to everyone that such a delicate issue cannot be dealt with effectively without a clear political vision at all levels. But how can we have such a vision, without a cultural perspective that allows us to face the wide spectrum of related problems?" Archbishop Paul Gallagher said Aug. 21 in a speech in Rimini, Italy.

Gallagher pointed to the Catholic social principles of solidarity and inalienable human dignity. He also spoke of the necessity to balance the rhetoric of "rights" in Europe with that of their corresponding duties.

"The concept of law no longer seems to be associated with the equally essential and complementary concept of duty, so that we end up affirming the rights of the individual without taking into account that every human being is linked to a social context, in which his rights and duties are connected to those of others and to the common good of society itself," Gallagher said, quoting Pope Francis' speech to the European Parliament in 2014.

The bishop said that the duty of solidarity is an indispensable underlying principle to achieve the pillars of the European unification project: the defense of freedom, the promotion of justice and the building of peace.

Solidarity, he said, is "not based on the compassion or repulsion that another arouses, but on the objectivity of a common human nature."

The crises Europe has faced in the last decade from the financial crisis to Brexit have been compounded by the growing "emotionality and reactiveness of political choices," he said.

"It is precisely this characteristic of objectivity and reasonableness that links duties and rights between them. Since the objective duty of solidarity with others corresponds to that set of rights that are as objective as any human person," Gallagher said.

"Where objectivity is lacking, the same system of rights loses its meaningfulness. This is what has been happening in the last fifty years when the interpretation of some rights has progressively changed, so as to include a multiplicity of new rights," he continued.

The process of "relativization of rights," Gallagher said, is intricately connected to the progessive exclusion of religion from European social life, which has resulted in an unhealthy secularization.

Gallagher said that the result of this process is a "fragmentation of existence," which he said was presciently described by St. John Paul II in his Post-Synodal Apostolic Exhortation on the Church in Europe:

"We find ourselves before a widespread existential fragmentation. A feeling of loneliness is prevalent; divisions and conflicts are on the rise. Among other symptoms of this state of affairs, Europe is presently witnessing the grave phenomenon of family crises and the weakening of the very concept of the family, the continuation or resurfacing of ethnic conflicts, the re-emergence of racism, interreligious tensions, a selfishness that closes individuals and groups in upon themselves, a growing overall lack of concern for ethics and an obsessive concern for personal interests and privileges," John Paul II wrote in 2003.

"The weakening of the sense of duty and the progressive subjectivation of rights has therefore weakened the very heart of the European project," Gallagher said.

"The European project arises with the idea of ďż˝<ďż˝