Pope Francis decried hypocrisy and self-interest Wednesday, saying that Christian community should always be characterized by generosity and solidarity. 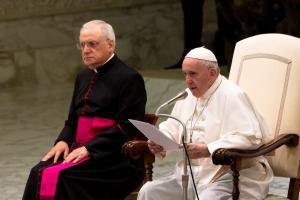 Vatican City, (CNA) - "A life set only on profiting and taking advantage of situations at the expense of others inevitably causes interior death," Pope Francis said Aug. 21 in Paul VI Hall.

"And how many people say they are close to the Church, friends of priests, bishops, while they are only looking for their own interest. These are the hypocrisies that destroy the Church," he added in a departure from his prepared remarks.

Pope Francis said he asks the Lord to "pour over us His Spirit of tenderness, which overcomes all hypocrisy and puts into circulation that truth which nourishes Christian solidarity."

The pope said that solidarity is "the inalienable expression of the nature of the Church," which he called the "tender mother of all, especially the poorest."

"Among Christians we cannot say: 'Poor person, he has a problem at home, he is going through this family difficulty'. But, I must pray. I carry it with me. I am not be indifferent. This is being a Christian," Francis explained.

Throughout Pope Francisďż˝ general audience, a young girl who appeared to have a mental disability, danced across the stage clapping her hands in front of the pope in Paul VI Hall.

"We have all seen this beautiful girl - she is beautiful ... victim of an illness and does not know what she is doing," he said.

Pope Francis asked the audience if they had prayed for this young girl and her family. "Whenever we see someone suffering we must pray," he said.

The pope stressed the importance of concrete acts of generosity in the life of a Christian, particularly with one's time and money.

"The sign that your heart has converted is when conversion reaches your pockets," he said. "There  is where we see if one is generous with others, if one helps the weakest, the poorest."

In the life of the Church, there have always been Christians who stripped themselves of unnecessary things to give them to those who needed them, Pope Francis said.

He pointed to the example of the early Christians described in the Acts of the Apostles.

"A concrete example of sharing and communion of goods comes to us from the testimony of Barnabas: he owns a field and sells it to deliver the proceeds to the Apostles," Francis said.

"The Christian community is born from the overabundant outpouring of the Holy Spirit and grows thanks to the leaven of sharing between brothers and sisters in Christ. There is a dynamism of solidarity that builds the Church as the family of God," he said.

Pope Francis also pointed out that there were negative examples of hypocrisy and selfishness among this same community. He described the story of Ananias and his wife Sapphira described in chapter 5 of the Acts of the Apostles.

Ananias and Sapphira sold a piece of property to give the proceeds to the apostles, but retained for themselves a portion of the purchase price.

To which St. Peter responded, "Ananias, why has Satan filled your heart so that you lied to the Holy Spirit and retained part of the price of the land? ... Why did you contrive this deed? You have lied not to human beings, but to God."

Upon hearing these words from Peter, Ananias fell down and died. "This cheating interrupts the chain of free sharing... and the consequences are tragic, are fatal," Pope Francis said.

"We could say that Ananias lied to God because of an isolated conscience," he said. "Hypocrisy is the worst enemy of this Christian community, of this Christian love: that of pretending to love each other, but only looking for one's own interest."