German archbishop in Auschwitz: Stand up against hubris of the politically powerful

On the eve of the 80th anniversary of the German invasion of Poland, a German archbishop has called for a stand against hubris and arrogance of those in political power. 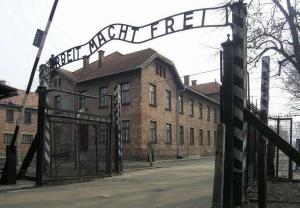 Krakow, Poland, (CNA) - Speaking on the occasion of a Mass in the former Nazi concentration camp in Auschwitz/Oswiecim on Aug. 14, Archbishop Ludwig Schick of Bamberg recalled the witness of the Polish martyr and saint Fr. Maximilian Kolbe.

"On the anniversary of the beginning of the Second World War, Maximilian Kolbe reminds us to profess that God is the Almighty to whom all must submit for peace and unity in our world today," Archbishop Schick said.

"No person can put themselves above God, and no nation can put itself above another, the German prelate stressed, adding that the most important contribution of Christians to peace and unity among peoples and nations was "to profess the one and only benevolent God, the Father of all creation."

God gives equal dignity and rights to all people, peoples and nations, and imposes the same duties of charity on all, Schick said, adding that St. Maximilian Kolbe had deeply committed himself to the obligation of charity.

The Polish priest resisted the totalitarian terror of Nazi ideology and was incarcerated in Auschwitz concentration camp. In 1941, he gave his life for a fellow prisoner. He was brutally executed after suffering starvation in a hunger bunker.

Today, St. Maximilian Kolbe is a patron saint of Europe, reminding Catholics to stand against war, abuse of power and arrogance on the part of politicians, powerful men and leaders who presume to take God's place, Schick continued.

Archbishop Schick is Chairman of the Contact Group of the German and Polish bishops' conferences. He is taking part in the 10th workshop of the Maximilian Kolbe Foundation, of which he is Chairman of the Board of Directors, on St. Maximilian Kolbe's Day of Remembrance at Oswiecim/Auschwitz. Since last Sunday, 45 participants from twelve European countries have been meeting there to discuss the topic "Dealing with the violent past."

This article was first published by CNA Deutsch, CNA's German-language sister agency. It has been adapted by CNA.