The Archbishop of Sydney has expressed his disappointment at the passage by the lower house of the New South Welsh parliament of a bill to decriminalize abortion, and the failure to pass limiting amendments. 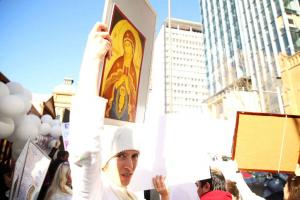 Sydney, Australia,  (CNA) - The Reproductive Health Care Reform Bill 2019 passed the Legislative Assembly Aug. 8 by a vote of 59 to 31.

"If a civilisation is to be judged by how it treats its weakest members, New South Wales failed spectacularly today," commented Archbishop Anthony Fisher, O.P.

The bill "still allows abortion right up to birth. It conscripts all medical practitioners and institutions into the abortion industry by requiring them to perform abortions themselves or direct women to an abortion provider. It still does nothing to protect mothers or their unborn children or to give them real alternatives," he said.

The bill would allow abortion for any reason up to 22 weeks of pregnancy; after that, it would allow for abortions if two doctors believe an abortion should be performed, considering physical, social, and psychological circumstances.

It does not mandate any counseling or period of consideration for the woman, and it would require doctors with conscientious objections to refer women to other abortion providers.

The bill would also make it a criminal offense for individuals to perform abortions without the proper authorizations, carrying a maximum penalty of seven years imprisonment for doing so.

According to supporters of the bill, it clarifies what they believe were previously ambiguous terms in penal code with regard to abortion.

But opponents believe it opens the possibility of elective abortion at any time, as long as two doctors consent.

Under current law, abortion is only legal in NSW if a doctor determineâ€ s that a womanâ€ s physical or mental health is in danger. "Mental health" has been interpreted by courts to include "economic and social stress."

The bill was to have been introduced to the state parliament July 30, and debated last week. Debate was delayed, however, until Aug. 6, after concerns it had been rushed through without proper consideration.

Tanya Davies, a Liberal Party member and fomer women's minister, introduced an amendment that would have barred sex-selective abortion.

The amendment was voted down, with some legislators arguing it could lead to racial discrimination and profiling, and that sex-selective abortion "is not an issue in NSW", reported The Catholic Weekly, the Archdiocese of Sydney's publication.

Instead, legislators supported an amendment expressing disapproval of sex-selective abortion and a review of the situation in a year's time.

Another amendment mandating that a child born alive after a failed abortion be given lifesaving care was also defeated.

"While I do not agree with abortion at any stage, I am horrified that a majority of lower house members deliberately and wilfully ignored the plight of babies born alive and that one member went so far as to state that informed consent (ie. free choice) is a barrier to abortion for pregnant persons," Dr. Rachel Carling, CEO of Right to Life NSW, commented.

Bishop Richard Umbers, an auxiliary bishop of Sydney and the Australian bishops' delegate for life, said that despite the bill's advancement, "the Catholic Church will continue to provide support, advise and care for all women facing any decision surrounding her pregnancy."

The thanked all who "rallied to oppose the culture of death," saying: "The graces given by God to the people of Sydney as a result of your fervent and tireless prayers and support for life will bring about great good for NSW in ways we will be blessed to witness and in many unknown ways."

St Mary's Cathedral in Sydney was opened for 65 hours of continuous Eucharistic adoration from Aug. 5-8, and hundreds of pro-life persons participated in a prayer vigil.

Archbishop Fisher thanked "the thousands of people who spoke up on behalf of the unborn and their mothers by contacting their MPs, by maintaining a consistent presence at Parliament House, and by praying for the defeat of this bill at roundâ€theâ€clock vigils at St Maryâ€ s Cathedral and elsewhere."

"Please continue to pray for a civilisation of life and love, and to make your views known to the members of the Legislative Council, asking them to vote against this bill," he urged.

The bill is opposed by the Catholic Church, the Eastern Orthodox Church, the Anglican Church of Australia, and the NSW Presbyterian Church.

Bishop Michael McKenna of Bathurst said July 31 that "Those who propose the legislation are no doubt sincere in their arguments. However, as so often in this debate, someone is forgotten. That is the human being: unborn, but human, who has no rights when her or his life or death is being decided. Also forgotten are those medical professionals who would conscientiously oppose such procedures, from whom the law could withdraw protection. And thoroughly forgotten are the mothers faced with difficult circumstances in their pregnancies, for whom, instead of genuine care, only the bleak option of a termination is offered."

And Fr. David Ranson, administrator of the Diocese of Broken Bay, said, "the killing of life, with the liberal possibility allowed for in the proposed legislation, cannot make ours a more human society. If with legal sanction we kill those who are most vulnerable ... we rob ourselves of our human dignity which is best demonstrated in a quality of care exercised even in the face of lifeâ€ s demand and challenge. Such an option represents a gross failure of social imagination and public moral leadership."

The bill was introduced by Alex Greenwich, an independent member who was instrumental in the legalization of same-sex marriage in Australia.

The Legislative Council is scheduled to table the bill for debate Aug. 20.