Letters from Theodore McCarrick to his abuse victims were published Tuesday by the Associated Press, in advance of a promised Vatican report on a Church investigation into the life of the former bishop. 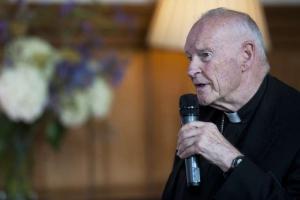 Vatican City, (CNA) - "I just wanted to say thank you for coming on Friday evening. I really enjoyed our night. You're a great kid and I know the Lord will continue to bless you. You are very much in my prayers," McCarrick wrote in 1987 letter to a seminarian in his diocese after the former bishop had reportedly groped him.

"We have an almost full house, and by tomorrow the couches and maybe the floor will be taken " but we would have made room even for a big guy like you," McCarrick wrote in another letter to the same seminarian.

"I'm sorry you weren't able to come. It would have been good to have a visit with you. If you have some time in October during the break, some of the sems might be coming away for a couple of days fishing with me. Let me know if you're interested," McCarrick wrote in the undated letter, apparently written from one of the ex-bishop's trips with his seminarians.

McCarrick went on to advise the seminarian, whom he had touched inappropriately, "Don't let the work-load overwhelm you and please make sure that you take the time to keep in shape. A little exercise will go a long way to clear the head and keep your feet on the ground."

AP reported that this unnamed seminarian "wrote to another bishop" about the inappropriate touching and that he had seen McCarrick engage in sexual activity with other seminarians during a fishing trip.

The letters did not include information about correspondence with other bishops or curial officials indicating what they knew of McCarrick's behavior, something hoped for in the forthcoming Vatican report.

The Vatican announced in October that Pope Francis ordered a review of all Holy See files pertaining to allegations of sexual misconduct on the part of McCarrick. The results of that review have not, to date, been released.

Vatican Secretary of State Cardinal Pietro Parolin said May 29 that the Vatican was still investigating the documentation concerning McCarrick and will issue a declaration upon the investigation's completion.

McCarrick is alleged to have engaged in sexually coercive and abusive misconduct with seminarians and priests for decades, inviting seminarians to sleep in his bed during weekend trips to his New Jersey beach house.

He was found guilty in a canonical process of "solicitation in the Sacrament of Confession, and sins against the Sixth Commandment with minors and with adults, with the aggravating factor of the abuse of power," according to a Feb. 16 Vatican communique.

McCarrick's letters include repeated invitations to call him, and details of his international travel schedule.

In one August 1987 letter written on Admirals Club letterhead on a flight to Warsaw, McCarrick wrote, "I just wanted to tell you how glad I am that we had the chance to get together this summer. It wasn't as often as I would have liked, but I know how 'social' my nephew is!"

"You stick with your uncle and you'll really meet interesting people," McCarrick wrote later in the letter.

AP also reported on McCarrick's postcards and letters sent to two other alleged victims, including postcards sent to James Grein, who says he was serially sexually abused by McCarrick beginning at age 11.

Grein testified Dec. 27 in a canonical deposition conducted by officials of the Archdiocese of New York as a part of the Vatican investigation regarding McCarrick's history of sexual abuse and misconduct.

To Rev. Desmond Rossi, a Newark seminarian on sabbatical in 1987 while McCarrick was archbishop, he wrote,  "You're still very much part of the family," in a letter AP reported on, but chose not to publish.

In 1989, Rossi moved to another diocese after he said McCarrick was inappropriately close and touched his leg in a meeting.

Pope Francis laicized Theodore McCarrick on Jan. 11. The former cardinal now longer has the right to exercise sacred ministry in the Church, except in the extreme situation of encountering someone who is in immediate danger of death After his dismissal from the clerical state, McCarrick continues to reside at a Franciscan friary in Kansas.