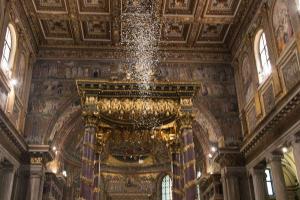 Rome, Italy, (CNA) - The miracle, which inspired the construction of the papal Marian basilica, involved a miraculous snowfall in Rome on Aug. 5 in the year 358.

According to tradition, the Virgin Mary appeared to both a nobleman named John and to Pope Liberius (352-366) in a dream foretelling the August snow and asking for a church to be built in her honor on the site of the snowfall. The church was rebuilt by Pope Sixtus III (432-440), after the Council of Ephesus in 431 declared Mary to be the Mother of God.

Cardinal Stanislsw Rylko, archpriest of the Basilica of St. Mary Major, celebrated the Mass to mark the 1,661th anniversary of this "miracle of the snow."

"On the occasion of this great feast of the Basilica of St. Mary Major, Jesus Christ also addresses us, each one of us, this phrase: 'Here is your Mother'. This invitation suggests having confidence in her, without fear, and listening to her, to let yourself be guided by her," Rylko said in his homily Aug. 5.

"Christ continues to entrust His mother to each of us, 'Here is your Mother' and we, like the apostle John, are called to take Mary to our house, to allow her to enter our lives, to make her a part of our joys, of our problems, of the challenges we face everyday," he said.

Among the four major papal basilicas in Rome, St. Mary Major is the only one that maintained its original structure. Mosaics dating back to the 5th century can be seen in the central nave of the basilica, which also houses the relic of the Holy Crib from the birth of Christ.

The dedication of St. Mary Major is celebrated each year on Aug. 5 with a Mass in which white rose petals fall from the ceiling as the "Gloria" is sung. The feast is preceded by a triduum of prayer at the basilica Aug. 2-4.

This year there will also be a light and laser show in the piazza in front of the basilica at 9 p.m. to celebrate the feast. The show will be dedicated to Notre Dame Cathedral, which was damaged by a fire in April. It will also recognize the 500th anniversary of Leonardo da Vinci's death this year.

"Let us not forget the words of the Virgin during the wedding at Cana. Our Mother today, as then, continues to say to each one of us: 'Do whatever Jesus tells you,'" Cardinal Rylko said at the Mass.