Vincent Lambert dies after removal of food and water 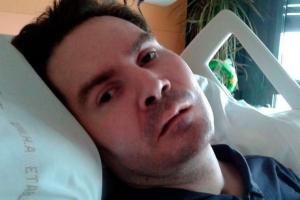 Lambert died July 11 at University Hospital in the northern French city of Reims, where doctors had withdrawn his water and feeding tubes more than one week before. Lambert had been under what his doctors called "profound and continuous sedation" since then.

The Vatican issued a statement Thursday, noting sadness over the news of Lambert's death.

"We pray that the Lord will welcome him into his house and we express closeness to his loved ones and to those who, up to the last, have committed themselves to assist him with love and dedication," said Alessandro Gisotti, interim director of the Holy See press office.

Gisotti also recalled the April 2018 words of Pope Francis, when in reference to Lambert's case, he said: "God is the only master of life from the beginning to the natural end and it is our duty to always guard it and not yield to the culture of waste."

Vincent Lambert was a quadriplegic and severely disabled for more than 10 years, after he sustained severe head injuries in a 2008 traffic accident.

After the accident, Lambert became the center of a protracted court battle over whether to have his food and hydration removed. Lambert's wife and six of his eight siblings supported the removal of life support, while his parents, reported to be devout Catholics, fought against it. His wife said Lambert had told her he would not want to be kept alive if in a "vegetative state," but this was never put in writing.

Several media outlets reported that Lambert "wept" when his family informed him of the doctors' intentions to remove food and water last week.

Euthanasia is illegal in France. However, a 2005 law allows physicians to refrain from using "disproportionate" treatments "with no other effect than maintaining life artificially."

In 2015, the European Court of Human Rights approved the removal of Lambert's life support, arguing in a 12-5 decision that the choice to stop his intravenous feeding did not violate European rights laws.

On June 28, The Court of Cassation ruled that a lower court did not have the legal competence to order his feeding tubes be reinserted. On July 2, doctors informed Lambert's family via email that they would withdraw food and water.

Archbishop of Paris, Michel Aupetit, has consistently advocated for Lambert and his family. He wrote a letter July 9 asking the priests of his archdiocese to offer Mass for Lambert.

"Dear brothers," he wrote, "it is now the time for contemplation, for compassion, and for prayer for Mr. Vincent Lambert. Either today or tomorrow I suggest that you celebrate Mass for his intention and entrusting him to the Lord, the God of mercy. This intention can also be extended to all of his relatives."

"We pray for the sick who are abandoned and left to die," the pope wrote. "A society is human if it protects life, every life, from its beginning to its natural end, with which is worthy to live or who is not."

"Doctors should serve life, not take it away."

This story was updated with the Vatican statement.