The history of humanity still echoes the relationship of Cain and Abel, Pope Francis told the Romani community on Sunday. 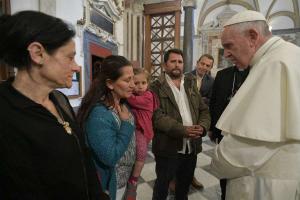 Blaj, Romania, (CNA) - In the final stop of his three-day apostolic trip to Romania, the pope met with the minority community, often called "gypsies," in the city of Blaj May 2. The Romani, also known as "travelers" in much of Europe, form a marginal and minority people present in countries across the continent.

Francis told the community that the experiences of prejudice and rejection they encountered were all too common, and that they "weighed down" on the pope's heart.

"History tells us that Christians too, including Catholics, are not strangers to such evil. I would like to ask your forgiveness for this. I ask forgiveness '" in the name of the Church and of the Lord '" and I ask forgiveness of you," the pope said.

Francis spoke about the Christian call of fraternal love which must animate human encounters, and apologized for times "when we have discriminated, mistreated or looked askance at you, with the look of Cain rather than that of Abel."

Indifference to the other, the pope said, is the beginning of anger, resentment, and prejudice. The Romani community had, he insisted, a unique heritage and character with much to offer the wider Christian community.

"We need those gifts: respect for the value of life and of the extended family, solidarity, hospitality, helpfulness, support and concern for the vulnerable within your community, respect and appreciation for the elderly and for the religious meaning of life, spontaneity and joie de vivre."

"Wherever you find yourselves, share those gifts and try to accept all the good that others can offer to you," Francis said.

The pope insisted that the Church must be a place of encounter, where the other is always welcomed and valued, but that this required a constant choice by each person.

"Let us choose the way of Jesus," he said, while insisting that though this way demanded effort and intention, passing through forgiveness, ultimately it was the only road to peace.

"May we not let ourselves be dragged along by the hurts we nurse within us; let there be no room for anger. For one evil never corrects another evil, no vendetta ever satisfies an injustice, no resentment is ever good for the heart and no rejection will ever bring us closer to others."

The pope remined the crowd that the universal human dignity of each person must be the cornerstone of every interaction, and this was not a requirement exclusive to Christians.

"Deep down, we are not Christians, and not even good human beings, unless we are able to see the person before his or her actions, before our own judgments and prejudices."

"The Gospel of joy is communicated in the happiness of encounter and the knowledge that we have a Father who loves us. Knowing that he watches out for us, we learn how to watch out for one another."

Asking for the prayers of the people he met, the pope said that his short trip to the country had be a source of great joy, and his final meeting with the Romani people was a fitting end to his time in Romania.

"Our meeting is the last of my visit to Romania. I came to this beautiful and welcoming country as a pilgrim and a brother, in order to meet all its people," Francis said.

"Now I am returning home enriched by the experience of different places and special moments, but above all by faces. Your faces will color my memories and populate my prayers. I thank you and I bring you with me."