Pope in Romania: Martyred bishops gave their lives for fidelity to the Church

Declaring their beatification Sunday in Romania, Pope Francis said seven martyred Greek-Catholic bishops gave their lives for fidelity to the Church and in defense of the right to freedom of religion. 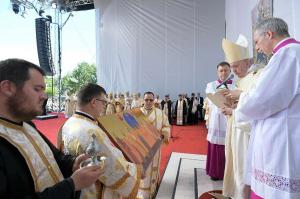 Blaj, Romania, (CNA) - "The new blesseds endured suffering and gave their lives to oppose an illiberal ideological system that oppressed the fundamental rights of the human person," Pope Francis said June 2, during a Greek-Catholic Divine Liturgy in the "Field of Freedom," in Blaj, Romania.

"These pastors, martyrs for the faith," he emphasized, "re-appropriated and handed down to the Romanian people a precious legacy that we can sum up in two words: freedom and mercy."

"With great courage and interior fortitude, they accepted harsh imprisonment and every kind of mistreatment, in order not to deny their fidelity to their beloved Church," the pope said, adding that "in the face of fierce opposition from the regime, they demonstrated an exemplary faith and love for their people."

Blessed Valeriu Traian Frentiu, Vasile Aftenie, Ioan Suciu, Tito Livio Chinezu, Ioan Balan, Alexandru Rusu, and Iuliu Hossu were killed "in hatred of the faith" between 1950 and 1970, during the Soviet occupation of Romania and the rule of Nicolae Ceausescu.

This was a tragic period for the Catholic community in Romania, which was "put to a harsh test by a dictatorial and atheistic regime," Francis said, noting that not only these seven blesseds, but "all the Bishops and faithful of the Greek-Catholic Church and those of the Latin rite Catholic Church were persecuted and imprisoned."

He quoted Bl. Iuliu Hossu, who once said during his imprisonment: "God has sent us into this darkness of suffering in order to offer forgiveness and to pray for the conversion of all."

Today, Catholics make up less than 6% of the population of Romania, which is majority Orthodox. Most of the Catholics in the country are of the Latin rite, and come from Romanian, Hungarian, and German language and ethnic groups.

The Romanian Greek-Catholic Church, to which the new blesseds belonged, is a Byzantine rite Church in communion with the Holy See.

In his homily, the pope emphasized that an important part of the spiritual legacy of the new blesseds was the mercy they showed in their readiness to suffer martyrdom meekly and without hatred toward their persecutors.

"The mercy they showed to their tormentors is a prophetic message, for it invites everyone today to conquer anger and resentment by love and forgiveness, and to live the Christian faith with consistency and courage," he stated.

According to Pope Francis, today "new ideologies" are appearing which threaten to uproot people from their "richest cultural and religious traditions."

They are "forms of ideological colonization that devalue the person, life, marriage and the family," he said, encouraging Romanian Catholics "to bring the light of the Gospel to our contemporaries and to continue, like these blesseds, to resist these new ideologies now springing up."

"These lands know well how greatly people suffer when an ideology or a regime takes over, setting itself up as a rule for the very life and faith of people, diminishing and even eliminating their ability to make decisions, their freedom and their room for creativity," he said.

"May you be witnesses of freedom and mercy, allowing fraternity and dialogue to prevail over divisions," he said, praying that "the maternal protection of the Blessed Virgin Mary, Mother of God, and the intercession of the new blesseds accompany you on your journey."

According to organizers, there were an estimated 60,000 people at the Divine Liturgy and beatification in the Field of Liberty in Blaj, and another 20,000 taking part through viewing large screens set up in a few of the town squares. Afterward, Pope Francis recited the Regina Coeli.

The beatification took place on the third and final day of an apostolic visit to Romania, the first since St. Pope John Paul II visited in 1999. During his visit, Pope Francis met with the Romanian Catholic communities and with the Romanian Orthodox Patriarch Daniel and members of the Holy Synod.