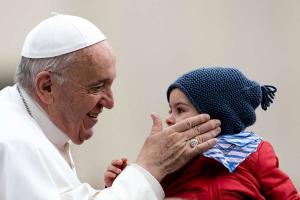 Vatican City, (CNA) - "The Christian knows how overwhelming the power of evil is, and at the same time he experiences how much Jesus, who never succumbed to its flattery, is on our side and comes to our aid," Pope Francis said in St. Peter's Square May 15.

The pope connected the last line of the Our Father prayer, "Deliver us from evil," to Christ's crucifixion.

"Deliver us from evil" covers a wide range of human experiences, he explained: "the mourning of man, innocent suffering, slavery, the exploitation of others, the cry of innocent children."

In the Passion "Jesus fully experienced the piercing of evil. Not only death, but death on the cross. Not only loneliness, but also contempt, humiliation," Pope Francis said.

"Thus the prayer of Jesus leaves us the most precious of inheritances: the presence of the Son of God who has freed us from evil, struggling to convert it," he said.

Pope Francis explained that invoking God when faced with evil is "an essential characteristic of Christian prayer."

"Jesus teaches his friends to put the invocation of the Father before everything, even and especially at times when the evil one makes his threatening presence felt," he said.

"There is evil in our life, its presence is indisputable," Francis said. "History books are the desolate catalog of how much our existence in this world has often been a failed venture."

"There is a mysterious evil, which surely is not the work of God," he explained. "At times it seems to take over: on some days its presence seems even sharper than that of God's mercy."

However, Pope Francis said, forgiveness flows from Christ on the cross, which liberates us from evil.

"In the hour of the final fight ... He offers a word of peace: 'Father, forgive them because they do not know what they do,' " he said.

"'Deliver us from evil.' With this expression, one who prays not only asks not to be abandoned in the time of temptation, but also begs to be liberated from evil," he said.

"If there were not the last verses of the 'Our Father' how could sinners, the persecuted, the desperate, the dying pray?" Pope Francis asked.

"The 'Our Father' resembles a symphony that asks to be fulfilled in each of us," he said.

As Pope Francis entered the general audience on the popemobile this week, he greeted eight migrant children from Syria, Nigeria, and Congo, who arrived in Italy on a humanitarian vessel from Libya April 29..