As the roof of Notre-Dame de Paris burned Monday evening, young Frenchwoman Julie Brocas wandered the streets of the city '" she did not want to go home, but she was too emotionally exhausted to continue watching the flames engulf the cathedral. 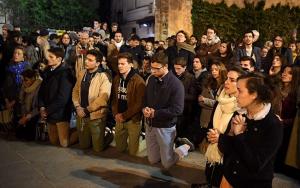 Paris, France, (CNA) - That is when she got a text from her friend spreading the news about a rosary being prayed that night at Place Saint-Michel; her friend had learned about it through Facebook.

Brocas passed other groups of people singing hymns in the dark as she walked to join her friend where a crowd had already gathered at Place Saint-Michel, a popular Parisian meeting spot not far from the Paris cathedral.

Place Saint-Michel is named for a fountain topped by a large statue of the Archangel Michael wielding his sword above the devil.

"We sang songs in French," Brocas said, "and while praying the rosary we were singing the prayers instead of saying them."

Brocas lives close to the cathedral and sees it every day. It is a historical monument witnessing to Catholic history, she said.

"It's also a great symbol of faith; how faith can motivate people to build masterpieces of architecture in order to show God their love. Notre-Dame is the face of Paris and the face of France."

Ksenia Arsenieva, a student who has lived in Paris most of her life, was in one such crowd of people Monday night. They were singing the Hail Mary in front of Saint-Julien-le-Pauvre Catholic Church, across the Seine from Notre-Dame.

She is Russian Orthodox, but said when she picked up what the words to the hymn were, she joined in. She filmed a part of it on her phone for her mother, whom she said is deeply religious.

"Whether you're a Catholic or not, [Notre-Dame] plays a huge role in the city beyond its religious significance, and seeing it burn was genuinely tragic," Arsenieva told CNA.

She said the cathedral is personally significant to her and to Parisians, noting that in high school, she and her friends would sometimes attend Sunday Mass there, and they "still often sit on the square in front of the cathedral on sunny weekends."

Arsenieva said people were watching Notre-Dame and praying for hours during the fire, and on her way home she saw more people praying and singing in other districts of Paris.

"I passed by Saint-Suplice on my way home, a church in the 6th district of Paris, and I noticed a crowd of faithful kneeling and praying for Notre-Dame there too," she said.

St. Suplice, the second-largest church in Paris, is where Archbishop Michel Aupetit of Paris will now celebrate the Holy Week liturgies after the fire at Notre-Dame.

"All in all, this is a tragedy, not just for Catholics, but for Christians in general, and for French people at large," Arsenieva said.

Bitna Kim is a South Korean living in Paris and studying at Paris Institute of Political Studies. She told CNA seeing Notre-Dame on fire was "a great shock" and that she feels deeply sorry for what happened.

Kim was in one of the crowds watching and said when she heard people singing prayers in French, it made her start to cry, because through their singing she could see how much the cathedral "deeply touches" the emotions and spiritual lives of Parisians.

"For me, I felt their singing of a hymn clearly shows solidarity and community when facing a national tragedy," Kim stated.
Courtney Grogan contributed to this report.