The Vatican updated Tuesday the complementary norms of the constitution governing personal ordinariates, a structure by which Anglicans may enter into full communion with the Catholic Church. 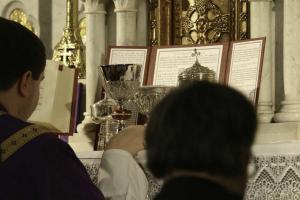 Vatican City, (CNA) - The complementary norms, approved by Pope Francis and published April 9 by the Congregation for the Doctrine of the Faith, correspond to the apostolic constitution Anglicanorum coetibus, which was promulgated by Benedict XVI in 2009.

An ordinariate is a special type of jurisdiction under church law. It is a canonical structure similar to a diocese that exercises jurisdiction over a particular group of Catholics, as determined by the Holy Father. They are overseen by an ordinary, who is either a bishop or a priest, and have a governing council, which assists in decision making for the ordinariate.

There are currently three Personal Ordinariates: The Chair of St. Peter in the United States and Canada, Our Lady of Walsingham in England, and Our Lady of the Southern Cross in Australia.
A new complementary norm regards the celebration of Divine Worship, the liturgical form which is approved for use in the Ordinariates and which "gives expression to and preserves for Catholic worship the worthy Anglican liturgical patrimony, understood as that which has nourished the Catholic faith throughout the history of the Anglican tradition and prompted aspirations towards ecclesial unity."

It notes that "public liturgical celebration according to Divine Worship is restricted to the Personal Ordinariates."

Ordinariate priests may celebrate Mass according to Divine Worship outside of Ordinariate parishes privately, or publicly given they have the permission of the pastor or rector of the corresponding church or parish.

The norms for the formation of ordinariate priests were also modified. The second section of article 10 now says that "Ordinariate Seminarians will receive their theological formation with other seminarians at a seminary or theological faculty in agreement with the Diocesan Bishop or Bishops concerned." It had previously said that "Candidates for priestly ordination" will receive this formation "in conformity with an agreement concluded between the Ordinary and, respectively, the Diocesan Bishop or Bishops concerned."

The section on continuing formation of clerics has added that the Ordinariate will see to "their own programs of ongoing formation" in addition to participation in local programs provided by the episcopal conference and diocesan bishop.

In November, for the 10th anniversary of Anglicanorum coetibus, the Pontifical Gregorian University in Rome will host a conference on the topic of the personal ordinariate.

Pope Francis had previously amended the complementary norms in 2013 to provide that someone baptized in the Catholic Church but who has not completed the Sacraments of Initiation, and subsequently returns to the practice of the Church as a result of the evangelizing mission of the Ordinariate, may be admitted to the Ordinariate.