Pope's Via Crucis to highlight suffering of trafficked people

The pope's annual Good Friday Stations of the Cross, held at the Colosseum, will be written by a religious sister devoted to fighting human trafficking, it was announced Friday. 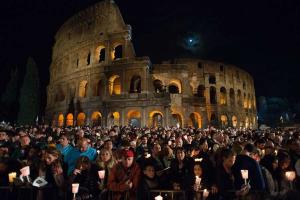 Vatican City, (CNA) - "The suffering of many persons who are victims of human trafficking will be the central themeof the meditations" this year, Vatican spokesman Alessandro Gisotti said April 5.

As is custom, Pope Francis will preside over the praying of the Stations of the Cross, also called the Via Crucis, April 19. Every year the pope asks someone to write the meditations to be read during each station, this year asking Sr. Eugenia Bonetti.

Bonetti, 80, is a Consolata Missionary Sister from northern Italy. As president of the "Slaves no More" association, she is the leader of the Italian Union of Major Superior' human trafficking work.

Her work and the work of those she leads is focused on helping women and girls in Italy to leave prostitution through in-person contact and interactions.
In 2007, she was the recipient of the U.S Secretary of State's International Women of Courage Award. She was also honored for her anti-trafficking work by the U.S. Department of State in 2004. She received the Order of Merit, Italy's highest honor, in 2014.

Bonetti was also instrumental in Pope Francis' decision to establish the International Day of Prayer and Awareness Against Human Trafficking, which was first celebrated in 2015.

Human trafficking is an important topic to Pope Francis, who has spoken out against human exploitation throughout his pontificate.

He has several times invoked the intercession of St. Josephine Bakhita, once a slave herself, to intercede to bring about an end to "this plague."

In February, Francis prayed for St. Bakhita to "assist all those who are trapped in a state of slavery; Intercede with God on their behalf so that the chains of their captivity can be broken."

"We beseech you to pray and intercede for all of us: so that we do not fall into indifference, so that we open our eyes and can look at the misery and wounds of so many brothers and sisters deprived of their dignity and freedom and hear their cry for help," he said.

Pope Francis has said he personally prays the Stations of the Cross frequently, and that it is a prayer he loves.

In 2018, the Via Crucis reflections were written by a group of Italian high schoolers.

The Roman tradition of holding the Way of the Cross at the Colosseum on Good Friday goes back to the pontificate of Benedict XIV, who died in 1758.

After dying out for a period, the tradition was revived in 1964 by St. Paul VI, while under St. John Paul II the Way of the Cross at the Colosseum became a worldwide television event; the pope himself used to carry the cross.

Now the cross is usually carried by individuals and families from around the world.

The pope personally selects who writes the meditations for the stations, and the choice can indicate issues he wants to zero in on.