Read the Full Text of the Papal Letter to Angela Merkel, Chancellor of Germany, ahead of the G 20 Summit

Pope Francis has sent a letter to Angela Merkel, the Chancellor of Germany, ahead of the G-20 Summit. Here is the full text of his letter. 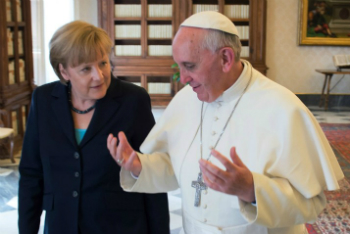 Chancellor of the Federal Republic of Germany

Following our recent meeting in the Vatican, and in response to your thoughtful request, I would like to offer some considerations that, together with all the Pastors of the Catholic Church, I consider important in view of the forthcoming meeting of the G20, which will gather Heads of State and of Government of the Group of major world economies and the highest authorities of the European Union.  In doing so, I follow a tradition begun by Pope Benedict XVI in April 2009 on the occasion of the London G20.  My Predecessor likewise wrote to Your Excellency in 2006, when Germany held the presidency of the European Union and the G8.

In the first place, I wish to express to you, and to the leaders assembled in Hamburg, my appreciation for the efforts being made to ensure the governability and stability of the world economy, especially with regard to financial markets, trade, fiscal problems and, more generally, a more inclusive and sustainable global economic growth (cf. G20 Leaders CommuniquĂ©, Hangzhou Summit, 5 September 2016).  As is evident from the Summit's programme, such efforts are inseparable from the need to address ongoing conflicts and the worldwide problem of migrations.

In my Apostolic Exhortation Evangelii Gaudium, the programmatic document of my Pontificate addressed to the Catholic faithful, I proposed four principles of action for the building of fraternal, just and peaceful societies: time is greater than space; unity prevails over conflict; realities are more important than ideas; and the whole is greater than the part.  These lines of action are evidently part of the age-old wisdom of all humanity; I believe that they can also serve as an aid to reflection for the Hamburg meeting and for the assessment of its outcome.

Time is greater than space.  The gravity, complexity and interconnection of world problems is such that there can be no immediate and completely satisfying solutions. Sadly, the migration crisis, which is inseparable from the issue of poverty and exacerbated by armed conflicts, is proof of this.  It is possible, though, to set in motion processes that can offer solutions that are progressive and not traumatic, and which can lead in relatively short order to free circulation and to a settlement of persons that would be to the advantage of all.  Nonetheless, this tension between space and time, between limit and fullness, requires an exactly contrary movement in the minds of government leaders and the powerful.  An effective solution, necessarily spread over time, will be possible only if the final objective of the process is clearly present in its planning.  In the minds and hearts of government leaders, and at every phase of the enactment of political measures, there is a need to give absolute priority to the poor, refugees, the suffering, evacuees and the excluded, without distinction of nation, race, religion or culture, and to reject armed conflicts.

At this point, I cannot fail to address to the Heads of State and of Government of the G20, and to the entire world community, a heartfelt appeal for the tragic situation in South Sudan, the Lake Chad basin, the Horn of Africa and Yemen, where thirty million people are lacking the food and water needed to survive.  A commitment to meet these situations with urgency and to provide immediately support to those peoples will be a sign of the seriousness and sincerity of the mid-term commitment to reforming the world economy and a guarantee of its sound development.

Unity prevails over conflict.  The history of humanity, in our own day too, presents us with a vast panorama of current and potential conflicts.  War, however, is never a solution.   As the hundredth anniversary of Pope Benedict XV's Letter to the Leaders of the Warring Peoples draws near, I feel bound to ask that the world put an end to all these "useless slaughters".  The goal of the G20 and of other similar annual meetings is to resolve economic differences peacefully and to agree on common financial and trade rules to allow for the integral development of all, in order to implement the 2030 Agenda and the Sustainable Development Goals (cf. CommuniquĂ© of the G20 Hangzhou Summit).  Yet that will not be possible unless all parties commit themselves to substantially reducing levels of conflict, halting the present arms race and renouncing direct or indirect involvement in conflicts, as well as agreeing to discuss sincerely and transparently all their differences.  There is a tragic contradiction and inconsistency in the apparent unity expressed in common forums on economic or social issues, and the acceptance, active or passive, of armed conflicts.

Realities are more important than ideas.  The fateful ideologies of the first half of the twentieth century have been replaced by new ideologies of absolute market autonomy and financial speculation (cf. Evangelii Gaudium, 56).  In their tragic wake, these bring exclusion, waste and even death.  The significant political and economic achievements of the past century, on the other hand, were always marked by a sound and prudent pragmatism, guided by the primacy of the human being and the attempt to integrate and coordinate diverse and at times opposed realities, on the basis of respect for each and every citizen.  I pray to God that the Hamburg Summit may be illumined by the example of those European and world leaders who consistently gave pride of place to dialogue and the quest of common solutions: Schuman, De Gasperi, Adenauer, Monnet and so many others.

The whole is greater than the part.  Problems need to be resolved concretely and with due attention to their specificity, but such solutions, to be lasting, cannot neglect a broader vision.  They must likewise consider eventual repercussions on all countries and their citizens, while respecting the views and opinions of the latter.  Here I would repeat the warning that Benedict XVI addressed to the G20 London Summit in 2009.  While it is reasonable that G20 Summits should be limited to the small number of countries that represent 90% of the production of wealth and services worldwide, this very situation must prompt the participants to a profound reflection.  Those states and individuals whose voice is weakest on the world political scene are precisely the ones who suffer most from the harmful effects of economic crises for which they bear little or no responsibility.  This great majority, which in economic terms counts for only 10% of the whole, is the portion of humanity that has the greatest potential to contribute to the progress of everyone.  Consequently, there is need to make constant reference to the United Nations, its programmes and associated agencies, and regional organizations, to respect and honour international treaties, and to continue promoting a multilateral approach, so that solutions can be truly universal and lasting, for the benefit of all (cf. Benedict XVI, Letter to the Honourable Gordon Brown, 30 March 2009).

I offer these considerations as a contribution to the work of the G20, with trust in the spirit of responsible solidarity that guides all those taking part.  I ask God's blessings upon the Hamburg meeting and on every effort of the international community to shape a new era of development that is innovative, interconnected, sustainable, environmentally respectful and inclusive of all peoples and all individuals (cf. CommuniquĂ© of the G20 Hangzhou Summit).

I take this occasion to assure Your Excellency of my high consideration and esteem.