Free World Class Education
FREE Catholic Classes
Pope Francis, has made it clear. He will continue the work toward the day when the two lungs of the Church, East and West, breathe together again

On March 20, 2013 Pope Francis addressed the ecumenical guests who had attended his installation. He began with warm words to the Orthodox brethren, specifically addressing Patriarch Bartholomew, "First of all, heartfelt thanks for what my Brother Andrew told us. Thank you so much! Thank you so much!" The two had met in a private meeting. The Patriarch of Constantinople expressed his hope that the two could meet in Jerusalem later this year and issued an invitation of historic significance. 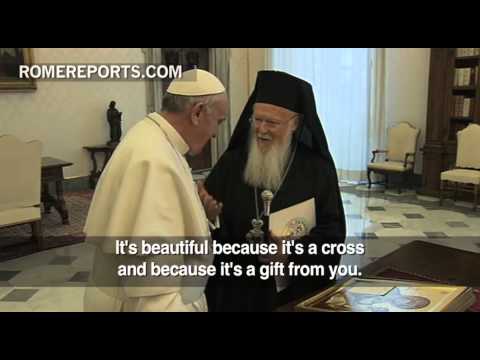 I am also persuaded that the healing of the division between the two sister churches would unleash a profound renewal of the entire Church at the dawn of this new missionary age. I believe that the gifts found in the whole Church will enrich both East and West and assist us in the One mission which we must face together in our One Lord.

I believe that as the West implodes under the fierce ravages of what His Holiness Benedict XVI called a Dictatorship of Relativism it is only the fullness of truth revealed in Jesus Christ which can save the West from its own demise. The West needs the Church, in the strength of its full witness, East and West, to become its soul in an age which is lost because it has lost its moral compass.

As a revert, one who returned to my Catholic faith as a young man, I walked the way home by way of the early Church Fathers. Had I not had been baptized a Catholic of the Latin Rite; I might have become an Eastern Christian. As the decades of my life have unfolded, including my theological studies and ordination to the Order of Deacon, my vision and theological viewpoint have become  profoundly Eastern. So too is my worship. I have long prayed with icons and love the Divine Liturgy. However, I cherish the unity that comes with the Chair of Peter.

Let me be clear, I am deeply and happily ensconced in the Roman Catholic Church. I am glad that I have authorization to serve the Divine Liturgy of the Eastern Church. For a number of years I had the privilege of regularly serving the Divine Liturgy and I miss it. I love the Liturgy, East and West, however I find the depth of the Mystery is beautiful captured in the Liturgy of the East.

There is a Latin maxim that addresses the centrality of worship in the life, identity and mission of the whole Church; "Lex Orandi, Lex Credendi, Lex Vivendi". It means that the law of prayer or worship is the law of belief and the law of life. Or, even more popularly rendered, as we worship, so will we believe and live!

Worship is not an add on for a Catholic or an Orthodox Christian. It is the foundation of Catholic and Orthodox identity; expressing our highest purpose. Worship reveals how we view ourselves in relationship to God, one another and the world into which we are sent to carry forward the redemptive mission of Jesus Christ. How the Church worships is a prophetic witness to the truth of what she professes.

Good worship becomes a dynamic means of drawing the entire human community into the fullness of life in Jesus Christ, lived out in the communion of the Church. It attracts - through beauty to Beauty. Worship informs and transforms both the person and the community which participates in it. There is reciprocity between worship and life.

Finally, I long for the full communion of East and West because my oldest son is an Orthodox Christian. He, his wife and their children are all practicing Orthodox Christians. The more I visit them these days the more I appreciate the beauty of the interweaving of faith and life which comes with Eastern Christianity and its practices. Yet, the more painful our separation at the Altar, the Eucharistic Table, also becomes. I believe the pain gives me a glimpse into the very heart of the Lord who longs for our unity.

So, I watch for every sign that the two lungs of the One Church are beginning to fill with the one breath of Divine Life, the Holy Spirit. The Holy Spirit alone can animate the One New Man, Jesus Christ, to heal the division which has gone on for too long in His Body. I watch with the eyes of living faith. Some say I see these developments with  "Rose Colored glasses". If I do see through the color of rose, it is because the color symbolizes the hope which comes from faith in the Resurrection of Christ Jesus. It is also because of my bedrock conviction concerning His one plan for His One Church.

The move toward full communion between the Orthodox and Catholic Churches is prompted by the Holy Spirit. I maintain it is the most important development of the Third Christian Millennium. It has extraordinary implications for the West, indeed for the whole world, at a critical time in history. I believe it will continue and result in the healing of the wounds which for too long have separated the Church. I believe that Pope Francis and Patriarch Bartholomew have begun to travel down the road together.

In his first papal message, His Holiness Benedict XVI proclaimed, "Nourished and sustained by the Eucharist, Catholics cannot but feel encouraged to strive for the full unity for which Christ expressed so ardent a hope in the Upper Room. The Successor of Peter knows that he must make himself especially responsible for his Divine Master's supreme aspiration.

Indeed, he is entrusted with the task of strengthening his brethren (cf. Lk 22: 32). With full awareness, therefore, at the beginning of his ministry in the Church of Rome which Peter bathed in his blood, Peter's current Successor takes on as his primary task the duty to work tirelessly to rebuild the full and visible unity of all Christ's followers. This is his ambition, his impelling duty."

Pope Benedict placed the commitment to the full communion of the Church at the forefront of his Papacy. This was especially evident in his love, respect and repeated overtures toward our Orthodox brethren, whom we recognize as a full Church and whose priesthood and Sacraments we also recognize. Since his act of selflessness in handing the office on to another, what would happen to the ground gained with our sister Church, the Orthodox Church, has been the subject of some specualtion.

Now, his successor, the humble, simple joyful pastor whom the world has embraced as a spiritual father, Pope Francis, has made it clear. He will continue the work toward the day when the two lungs of the Church, East and West, breathe together again. Interestingly, this Pope literally has only one lung due to an illness as a teenager.

On March 20, 2013 Pope Francis addressed the ecumenical guests who had attended his installation. He began with warm words to the Orthodox brethren, specifically addressing Patriarch Bartholomew, "First of all, heartfelt thanks for what my Brother Andrew told us. Thank you so much! Thank you so much!" The two had met in a private meeting. The Patriarch of Constantinople expressed his hope that the two could meet in Jerusalem later this year and issued an invitation of historic significance.

Pope Francis' reference to the Patriarch as "my brother Andrew" showed the fraternal affection said to exist between them already. However, it did much more. It pointed back to the ancient bond in which the Church will finds its path back to full communion, the brotherhood of Simon (Peter) and Andrew.

Will the Two Lungs of the Church, East and West Breathe Together Again? Join me in praying that it does indeed happen - for the sake of a world still waiting to be set free and reborn into the New World of the Church. May Pope Francis become the Pope of Christian unity. May what began between this Pope and the Patriarch, between peter and his brother Andrew, be the seed of the coming communion between the two sister Churches.