The martyrs of the early Church died for their faith in that God who was revealed in Jesus Christ, and for this very reason they also died for freedom of conscience and the freedom to profess one's own faith - a profession that no State can impose but which, instead, can only be claimed with God's grace in freedom of conscience. 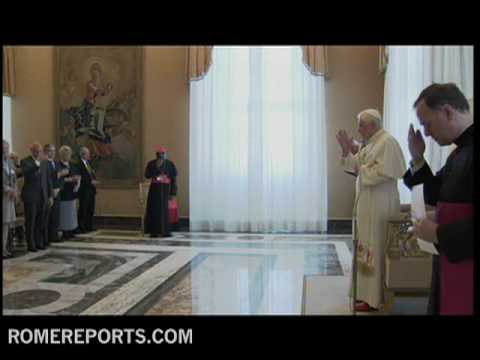 P>VATICAN CITY (Catholic Online) - Mary Ann Glendon, the Learned Hand Professor of Law at Harvard University, served as U.S. Ambassador to the Vatican and was appointed by Blessed John Paul II as the President of the Pontifical Academy of Social Sciences which he founded in 1994.  She enjoys global respect for her intelligence, eloquence and distinguished record of public service. She is a faithful Catholic who has defended the Church without compromise for many years and a Pro-Life Champion.

In 2009 Ambassador Glendon was scheduled to receive the Laetere Medal from the University of Notre Dame at commencement. When she learned that President Obama was to receive an honorary Doctor of Laws Degree and give the commencement speech in direct opposition to the directive of the US Bishops precluding such honors for those who oppose the Right to Life, she declined this distinguished award. She is a Catholic Leader who shows consistency and courage.

This year, the Pontifical Academy held its 17th annual plenary session on the theme "Universal Rights in a World of Diversity - The Case of Religious Freedom" during the weekend of the beatification of Blessed John Paul. She told Zenit News the pontifical academy members looked at the theme with "the conviction that religious freedom goes to the very heart of what it means to be human." She highlighted "four broad areas of threats to religious liberty."

The program for the event quoted an excerpt from a December 2005 address given by Pope Benedict XVI to the Roman Curia:  "The Second Vatican Council, recognizing and making its own an essential principle of the modern State with the Decree on Religious Freedom, has recovered the deepest patrimony of the Church. By so doing she can be conscious of being in full harmony with the teaching of Jesus himself (cf. Mt 22: 21), as well as with the Church of the martyrs of all time.

"The ancient Church naturally prayed for the emperors and political leaders out of duty (cf. I Tm 2: 2); but while she prayed for the emperors, she refused to worship them and thereby clearly rejected the religion of the State.The martyrs of the early Church died for their faith in that God who was revealed in Jesus Christ, and for this very reason they also died for freedom of conscience and the freedom to profess one's own faith - a profession that no State can impose but which, instead, can only be claimed with God's grace in freedom of conscience.

"A missionary Church known for proclaiming her message to all peoples must necessarily work for the freedom of the faith. She desires to transmit the gift of the truth that exists for one and all. At the same time, she assures peoples and their Governments that she does not wish to destroy their identity and culture by doing so, but to give them, on the contrary, a response which, in their innermost depths, they are waiting for - a response with which the multiplicity of cultures is not lost but instead unity between men and women increases and thus also peace between peoples."

Each of the participants received a copy of the letter below which was sent from Pope Benedict. It reaffirms a major theme of his pontificate, religious freedom is a fundamental human right.

I am pleased to greet you and the members of the Pontifical Academy of Social Sciences as you hold your seventeenth plenary session on the theme of Universal Rights in a World of Diversity: the Case of Religious Freedom.

As I have observed on various occasions, the roots of the West's Christian culture remain deep; it was that culture which gave life and space to religious freedom and continues to nourish the constitutionally guaranteed freedom of religion and freedom of worship that many peoples enjoy today. Due in no small part to their systematic denial by atheistic regimes of the twentieth century, these freedoms were acknowledged and enshrined by the international community in the United Nations' Universal Declaration of Human Rights.

Today these basic human rights are again under threat from attitudes and ideologies which would impede free religious expression. Consequently, the challenge to defend and promote the right to freedom of religion and freedom of worship must be taken up once more in our days. For this reason, I am grateful to the Academy for its contribution to this debate.

Deeply inscribed in our human nature are a yearning for truth and meaning and an openness to the transcendent; we are prompted by our nature to pursue questions of the greatest importance to our existence. Many centuries ago, Tertullian coined the term libertas religionis (cf. Apologeticum, 24:6). He emphasized that God must be worshipped freely, and that it is in the nature of religion not to admit coercion, "nec religionis est cogere religionem" (Ad Scapulam, 2:2).

Since man enjoys the capacity for a free personal choice in truth, and since God expects of man a free response to his call, the right to religious freedom should be viewed as innate to the fundamental dignity of every human person, in keeping with the innate openness of the human heart to God. In fact, authentic freedom of religion will permit the human person to attain fulfilment and will thus contribute to the common good of society.

Aware of the developments in culture and society, the Second Vatican Council proposed a renewed anthropological foundation to religious freedom. The Council Fathers stated that all people are "impelled by nature and also bound by our moral obligation to seek the truth, especially religious truth" (Dignitatis Humanae, 2). The truth sets us free (cf. Jn 8:32), and it is this same truth that must be sought and assumed freely. The Council was careful to clarify that this freedom is a right which each person enjoys naturally and which therefore ought also to be protected and fostered by civil law.

Of course, every state has a sovereign right to promulgate its own legislation and will express different attitudes to religion in law. So it is that there are some states which allow broad religious freedom in our understanding of the term, while others restrict it for a variety of reasons, including mistrust for religion itself.

The Holy See continues to appeal for the recognition of the fundamental human right to religious freedom on the part of all states, and calls on them to respect, and if need be protect, religious minorities who, though bound by a different faith from the majority around them, aspire to live with their fellow citizens peacefully and to participate fully in the civil and political life of the nation, to the benefit of all.

Finally, let me express my sincere hope that your expertise in the fields of law, political science, sociology and economics will converge in these days to bring about fresh insights on this important question and thus bear much fruit now and into the future. During this holy season, I invoke upon you an abundance of Easter joy and peace, and I willingly impart to you, to Bishop Sánchez Sorondo and to all the members of the Academy my Apostolic Blessing.