The Chinese government's campaign to develop "religion with Chinese characteristics" has increased persecution of the country's Christians, the human rights watchdog ChinaAid has said. 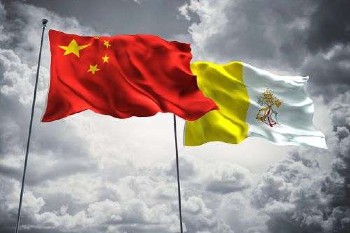 Flags of China and Vatican City

"Encouraging snitching is a common method applied by the Chinese Communist Party to reinforce its rule," said ChinaAid. "Authorities used money incentives to motivate non-believers to report house churches' so-called 'illegal religious activities', attempting to produce conflicts and tension between non-Christians and Christians and increase the mistrust between the two people groups."

Some regions of China have a ratings and review system which deducts points for non-compliant churches. If churches refuse to address violations or score under 50 points for two consecutive years, they can lose their registration as official religious sites. Christian churches that bear religious logos or bear crosses can lose five points, as can churches that do not fly the national flag.

By contrast, active reporting of illegal religious activity to authorities will earn a church five points.

Automatic vetoes drop a church to zero points, for instance if it disobeys the government, organizes protests, contacts overseas members, contacts religious group members whom the government considers a "cult," or running Sunday schools or summer camps. A computerized management and compliance model is active at some religious sites.

In March 2019, all the Catholic priests who had not joined the Chinese Patriotic Catholic Association in the Diocese of Mindong were ordered to join or leave their churches. A monetary reward equal to about $28,600 was offered to priests who joined.

The Church in mainland China has been divided for some 60 years between the underground Church, which is persecuted and whose episcopal appointments are frequently not acknowledged by Chinese authorities, and the Chinese Patriotic Catholic Association, a government-sanctioned organization.

In September 2018 the Vatican and China reached an agreement on the ordination of bishops intended to normalize the situation of China's Catholics and unify the underground Church and the CPCA.

According to some reports, the government's persecution of the underground Church has intensified after the agreement was signed. Critics of the agreement include Cardinal Joseph Zen Ze-kiun, Bishop Emeritus of Hong Kong.

The treatment of Chinese Christians can vary by province and locality. According to ChinaAid, Zhejiang province has been "the most aggressive" in suppressing Christianity. It was the starting point for the campaign to demolish crosses.

An appendix to the report summarizes instances of persecution in which individuals are harassed, detained, or prosecuted. Some congregations are declared illegal and forced to shut down, and forced demolition of crosses or churches.

ChinaAid was founded in 2002 as a human rights and religious freedom advocacy group in response to the announcement of a death sentence for five Chinese house church leaders.

A focus of the ChinaAid report is the Chinese government's new campaign to "Sinicize" Christianity.

"Throughout the year, ChinaAid observed escalated instances of religious oppression, driven by the government's campaign to develop 'religion with Chinese characteristics'," the NGO said.

Crosses and church buildings have been destroyed, and resisters are arrested. Christians are forced to sing nationalistic songs as part of their worship services and face social disabilities, harassment, and imprisonment.

Some provincial officials have removed all Christian symbols from buildings and banned children under 18 from entering churches.

"Government officials even condemned the behavior of teaching children to sing hymns at home as 'illegal'," ChinaAid said.

Government agencies ban the publication and sale of unauthorized Bibles and Christian books. New textbook editions of some literary classics, including the Hans Christian Anderson story The Little Match Girl and Daniel Defoe's Robinson Crusoe, are stripped of references to God or the Bible.

Some efforts to control Christianity are systematic and national in scope. Religious freedom is officially guaranteed by the Chinese constitution, but religious groups must register with the government, and are overseen by the Chinese Communist Party. The sinizication of religion has been pushed by President Xi Jinping, who took power in 2013 and who has strengthened government oversight of religious activities.

At a Nov. 26 meeting with religious leaders, the consultative conference discussed how to "use core socialist values to guide religious groups to reinterpret religious doctrine to ensure that it meet the requirements of the progressing times." Wang's speech emphasized the gradual development of a religious ideological system that shows Chinese characteristics and adapts religion to socialist society. The meeting required the comprehensive re-evaluation of religious canon and re-interpretations to better fit Chinese authorities' vision of progress, ChinaAid reported.

In 2018 Chinese authorities outlined a five-year sinicization plan for official Protestant groups, the Chinese Christian Council and the Three-Self Patriotic Movement, as well as a five-year plan outlined through 2022 for "promoting adherence to the path of sinicization of Catholicism," under the auspices of the CPCa.

There are similar plans for the other official religious groups of China, including Islam, Taoism, and Buddhism.

Some Catholic priests and bishops have been detained by authorities, as have other Christian ministers and laity.

On Sept. 10, the CPCA and the Bishops Conference of the Church in China issued a joint statement requiring the flying of the national flag, the singing of the national anthem, and prayers for blessings on China. The bodies also required a post-activity report.
ChinaAid's report draws on information from church leaders, church staff, ordinary Christians from house churches and state-run Three-Self Churches.

"After reviewing this information, ChinaAid has concluded that the persecution that occurred in 2019 exceeds that which happened in 2018," the report said.

The group suggests its information could represent only a fraction of the abuses committed in China. While it describes its information as "not comprehensive," it cited many cases from various provinces and municipalities showing a broad range of abuse.

Unlike previous years of data collection, ChinaAid said, it faced extreme difficulty in gathering information for its 2019 report. This has led the group to believe that the Chinese government is "threatening or otherwise intimidating Christians into not reporting the abuses to international media." It said China's "lack of openness" on this matter has also encouraged this conclusion.

In urban areas the house churches have scattered into small groups. In rural areas, most house churches have gone underground and meet in "a semi-secret manner." Small gatherings by members of outlawed churches face "constant harassment and raids by authorities."

Some preachers must submit their sermons to officials in advance for review and for inspection later.

Some house churches have been forced to sign agreements that require them to have a specified location and meeting time, a limited number of people, and set activities. They must have a supervision team, activity agendas and logs, security regulations, and fire equipment. They are banned from changing location or size, accepting offerings or setting up bank accounts, inviting foreigners to preach, or hosting revival events or baptisms.
Chinese authorities with the United Front Work Department and the public security document released a document on how to combat "foreign religious infiltration." Officials aim to prevent the establishment of branch organizations of American and South Korean churches that are "against the Party and the government."

While the terms of the Vatican-China agreement have been kept confidential, it reportedly allows the CPCA to choose a slate of nominees for bishop, from which the pope would then select in making his appointment.

Cardinal Zen has been an outspoken critic of the agreement, calling it an act of "shameless surrender" to the communist government.