New Hong Kong bishop to be announced within weeks

Priests in the Diocese of Hong Kong are expecting the announcement of their new bishop within the next two weeks. 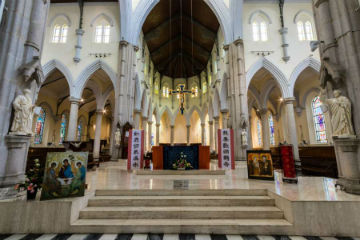 Hong Kong, China, (CNA) - Priests in the Diocese of Hong Kong are expecting the announcement of their new bishop within the next two weeks.

"We have been told to expect an announcement within the next ten days or so," a senior priest in Hong Kong told CNA Feb. 15. The priest confirmed that Rev. Peter Choy Wai-man is the expected appointee.

"I think by the end of the month we should see something official," the priest added.

The Hong Kong diocese has been without a permanent leader since the death of Bishop Michael Yeung Ming-cheung in January 2019.

On Jan. 17, CNA reported that the Vatican had selected Rev. Peter Choy Wai-man as Hong Kong's new bishop but had decided to delay the announcement of Choy's appointment indefinitely.

The delay was reportedly because of local and Vatican concerns that Choy is seen as sympathetic with the mainland Chinese government, while many Catholics in Hong Kong are supportive or engaged in pro-democracy protests taking place in the region.

Echoing those concerns, one Hong Kong priest described Choy to CNA as a "pro-Beijing hawk."

A second senior cleric in the diocese told CNA that despite those concerns, Vatican and Chinese authorities have agreed to Choy's appointment, and concerns over a backlash among local Catholics have apparently subsided.

"I think the coronavirus business has had at least something to do with it," he told CNA. "It is not as simple as cause and effect, but it has contributed. Initially, the worry was it might feature in the street protests and [the announcement] was delayed at least until after the [Chinese] New Year [Jan. 25], which was very heavily restrained this year."

"Now, with schools closed and public demonstrations much less on the agenda, there is a sense that the time is right."

Fr. Choy was born in Hong Kong in 1959, and ordained a priest in 1986. Since Oct. 2017, he has served as one of four vicars general of the Diocese of Hong Kong, appointed with responsibility for the bishop's office, the ongoing formation for both clergy and laity, and leading ecumenical and interreligious dialogue for the diocese. Choy also serves as the dean of Hong Kong's seminary.

Cardinal Joseph Zen Ze-kiun SDB, who led the Diocese of Hong Kong from 2002-2009 and is a critic of the Vatican's relationship to the Chinese government in Beijing, talked with CNA on Friday about the appointment.

Zen said that Choy's nomination could widen a growing divide among Chinese Catholics.

"There is a group of young Catholics [in Hong Kong] who are very strongly against this nomination" he said. The cardinal added that they hoped the Vatican might revisit the decision before it was publicly announced.

"The Catholic establishment [in Hong Kong] is divided," Zen said. "They say that the future bishop needs the blessing of Beijing."

The cardinal mentioned broad support among local Catholics for Hong Kong auxiliary Bishop Joseph Ha Chi-shing, who is associated with the protestors on the island, and has appeared at several demonstrations.

Last month, CNA reported that Bishop Ha had been initially selected by the Vatican to lead the Hong Kong diocese, but the decision was reversed after Ha was pictured at the front of a pro-democracy street demonstration.

"We have an auxiliary bishop, Bishop Ha, [who is] very good, and really a wise leader of the community during these last months," Zen said.

"But I know that the actual pontifical delegate, Cardinal Tong, he receives instructions from the Vatican and must follow those instructions - I suppose they are always on the line of compromise."

CNA reported last month that Cardinal Tong had recommended against an announcement of Fr. Choy's appointment until the political situation on the island had stabilized.

On Jan. 16, CNA asked Cardinal Pietro Parolin, the Holy See Secretary of State, about the selection of Fr. Choy to lead the Hong Kong diocese, and about the decision of the Vatican's decision to delay announcing the appointment.

On Feb. 15, a spokesman for Cardinal Parolin told CNA that the cardina