From the Philippines, a missionary in Tokyo

On Sundays, Fr. Raniel Berdos can be found strolling the aisles of St. Mary's Cathedral in Tokyo. 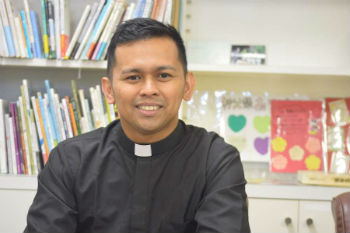 Tokyo, Japan, (CNA) - On Sundays, Fr. Raniel Berdos can be found strolling the aisles of St. Mary's Cathedral in Tokyo.

He wears a traditional black cassock and keeps his thick, black head of hair impeccable. He switches smoothly between Japanese and English, but maintains the same quiet enthusiasm through each conversation.

By the time the church is beginning to clear out, he's been approached by no less than a dozen parishioners -- many of them older "Church ladies," eager to talk about this or that happening behind the scenes at the parish.

On his way back to his office, Berdos, 35, is handed a bag of bread by a parishioner, who reminds him to share with the other clergymen.

Berdos is a missionary to Japan, from the Philippines. The priest grew up in the Diocese of Tagum. He has been a priest for three years, and Japan is his first assignment since being ordained.

He was sent to Japan once before, for a break after his third year of theology studies. It wasn't clear at the time whether he'd be sent back after his schooling was complete.

"It was ambiguous. They don't want to preempt the decision of the general superior."

Berdos is a member of the Missionaries of Saint Charles Borromeo, sometimes called the Scalabrinian Missionaries. The order was founded with the intention of providing aid and support to migrant Italians going out of Italy.

But since its foundation, the order has changed and morphed. It's also tweaked its target missions to better fit the needs of the modern world -- Italians leaving Italy no longer seem to require an entire order of clergy to oversee.

"What is relevant now is people going out for greener pastures and going abroad," said Berdos. "We're serving migrants, immigrants.

The Scalabrinians offer charitable assistance to migrants around the world. That can come in the form of medical help, as well as financial support.

At first, Berdos was disappointed with his assignment to Japan, or at least scared.

He had been expecting that as a new priest his first assignment would be somewhere where the order already had a sizable presence.

"My first desire was to go to Taiwan. Our congregation has two parishes in Taiwan, our mission is already stable in Taiwan," Berdos said.

"But we are still young here," he said.

"Here in Japan, we have to start from scratch."

Berdos estimates that in his experience, there are two Japanese priests to every foreign priest serving the Archdiocese of Tokyo. But that number varies considerably across the country.

"Every diocese has its own situation."

Despite the language gap and a steep learning curve, Berdos has managed to bond well with the other priests of St. Mary's.

"My Japanese is still struggling, but I can get along in day to day conversation."

Every month there is a meeting for the clergy of the parish. It is here that Berdos has opportunities to bond with priests he doesn't usually work with directly.

"We bond through what makes us common. Maybe in small things, maybe in big things too."

"I'm starting to feel at home here," he said.

While begins to mesh into Japan, Berdos knows he might at any moment be plucked out of the country and sent elsewhere.

"We are moved according to the needs of the Church. This [parish] cannot be my kingdom," he said, comparing a refusal to move elsewhere to staking a claim in a territory.

"Not forever, for sure," he laughed.

For other priests or laity considering doing work in Japan, Berdos offered a simple piece of advice:

"The Japanese church is young in Tokyo. Perhaps here you'll be able to integrate if you observe and be silent.

"In silence, you will be able to understand the words [between] the lines."