In the measure of a country, concern for human dignity and life is more important than economic strength, Pope Francis told Japanese authorities, civil servants, and diplomats Monday in Tokyo. 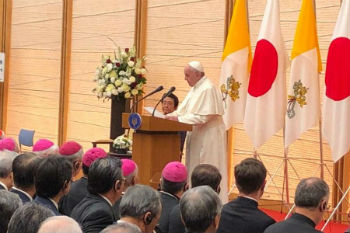 Tokyo, Japan, (CNA) - In the measure of a country, concern for human dignity and life is more important than economic strength, Pope Francis told Japanese authorities, civil servants, and diplomats Monday in Tokyo.

"Human dignity, needs to be at the center of all social, economic and political activity," he said Nov. 25 at the prime minister's official residence of Kantei.

He also said intergenerational solidarity and concern for the forgotten and excluded should be fostered, pointing in particular to the young, the elderly, and the lonely.

"We know that," he added, "in the end, the civility of every nation or people is measured not by its economic strength, but by the attention it devotes to those in need and its capacity to be fruitful and promote life."

In a change from the usual protocol, Pope Francis met with the prime minister and authorities of Japan at almost the end of his trip, rather than the beginning.

The pope's first full day in Japan was instead spent visiting Nagasaki and Hiroshima, where he spoke against nuclear weapons and honored the Japanese martyrs of the 17th and 18th centuries.

His visit to Japan was the second leg of a six-day trip to Asia, which began in Thailand Nov. 20-23.

Pope Francis urged authorities in Japan to include human ecology in their efforts to protect the environment, including "confronting the growing gap between rich and poor in a global economic system that enables a select few to dwell in opulence while the majority of the world's population lives in poverty."

He used the delicacy of Japan's beautiful cherry blossom to illustrate the fragility of the common home to natural disasters and "to greed, exploitation and devastation at the hands of human beings."

As a young Jesuit in Argentina, Pope Francis was inspired by the example of the first missionaries to Japan, such as St. Francis Xavier, and wanted to go to the country as a missionary, though he was prevented for health reasons.

"In these days, I have experienced and have come to esteem once more the precious cultural heritage that Japan throughout many centuries of its history has been able to develop and preserve, and the profound religious and moral values that characterize this ancient culture," he said.

Praising the beauty of the country, he quoted the Jesuit missionary Alessandro Valignano, who wrote in 1579: "Whoever wishes to see what our Lord has bestowed upon man need only come to Japan to see it."

He praised Japan's attention to the suffering of the less fortunate, the handicapped, and the disabled.

Pope Francis also said that the purpose of his trip was "to confirm Japanese Catholics in their faith, their charitable outreach to those in need and their service to the country of which they are proud citizens."

Before the meeting with authorities, Pope Francis celebrated Mass for 50,000 people in the Tokyo Dome. Present at the Mass was ex-death row inmate Iwao Hakamada.

Hakamada, 83, was released from death row after 48 years. A boxer, he had been convicted in 1966 of a quadruple murder but was released in 2014 when new DNA evidence led to a suspension of his sentence. He is currently awaiting retrial by Japan's supreme court.

Hakamada was baptized in prison on Christmas Eve 1984. The Catholic bishops of Japan invited Hakamada to attend the papal Mass Nov. 25.