Merciful care should affirm the dignity of the sick, pope tells Catholic hospital in Thailand

The dignity of the human person can be recognized and affirmed through loving medical care to the sick and injured, Pope Francis told the staff of St. Louis Catholic Hospital in Bangkok Thursday. 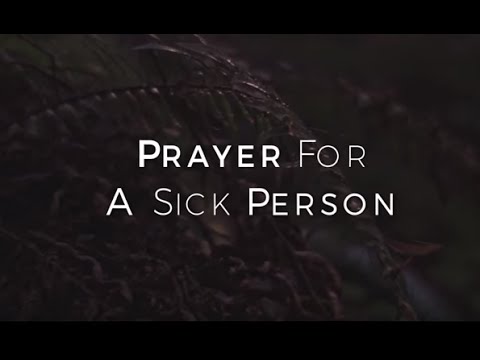 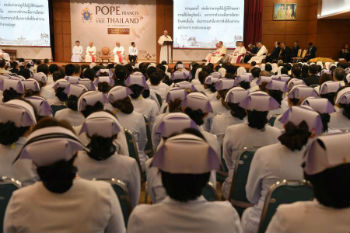 Bangkok, Thailand, (CNA) - The dignity of the human person can be recognized and affirmed through loving medical care to the sick and injured, Pope Francis told the staff of St. Louis Catholic Hospital in Bangkok Thursday.

"The healing process should rightly be seen as a powerful anointing capable of restoring human dignity in every situation, a gaze that grants dignity and provides support," the pope said Nov. 21.

The work of hospital employees, he said, "is about welcoming and embracing human life as it arrives at the hospital's emergency room, needing to be treated with the merciful care born of love and respect for the dignity of each human person."

Pope Francis addressed around 700 doctors, nurses, and service personnel from the Catholic hospital and other health centers run by the Church in Thailand.

He is in Bangkok for three days as part of a six-day journey which will also take him to Japan. The pope's appointments in Bangkok include Mass, interreligious meetings, and visits to the prime minister and king of Thailand.

At the hospital, the pope thanked the Sisters of Saint Paul of Chartres and other religious sisters for their joyful dedication to Catholic healthcare.

"You enable us to contemplate the maternal face of God who bends down to anoint and raise up his children," he said.

Francis stated that Catholic hospital workers "carry out one of the greatest works of mercy, for your commitment to health care goes far beyond the simple and praiseworthy practice of medicine."

"This is not only a matter of procedures and programs; rather, it has to do with our readiness to embrace whatever each new day sets before us," he said.

After the encounter with medical personnel, the pope met privately with around 40 sick and disabled in the hall of the hospital, "as a way of accompanying them, however briefly, in their pain," he explained.

Illness, he said, can lead people to ask serious questions about life, death, and suffering, but "by uniting ourselves to Jesus in his passion, we discover the power of his closeness to our frailty and our wounds."

Francis said he was glad to hear the hospital's philosophy is based on charity, because "it is precisely in the exercise of charity that we Christians are called not only to demonstrate that we are missionary disciples, but also to take stock of our own fidelity, and that of our institutions, to the demands of that discipleship."

The director of the hospital, Dr. Tanin Intragumtornchai, told Pope Francis Nov. 21 that the Catholic hospitals of Thailand "are not the hospitals for business."

"We have never entered into the commercial competition but [are] trying our best wholeheartedly to spread the Good News of Christ, especially through love and compassion," he said.

"As your holiness once said ... love is the best medicine and healing not only for the body but also for the spirit; and we realize well that this is our mission."

Catholics make up around .5% of the population in Thailand, which is mostly Buddhist. Catholic missionaries from Portugal first brought Catholicism to the area nearly 500 years ago.

After Thailand, Pope Francis will head to Japan Nov. 23-26, where he will visit Nagasaki and Hiroshima, the sites of the 1946 atomic bombings.