The Chinese government is defending its policy of mass detention and re-education of Muslims in the country's northwest as an appropriate measure against terrorism, following a New York Times report that showed the direct involvement of senior government officials in ordering the policy. 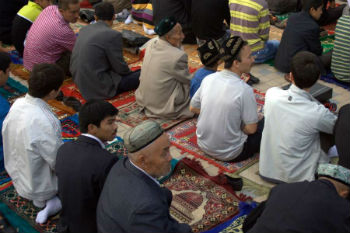 Uyghurs at a mosque in Kashgar Xinjiang China

Urumqi, China, (CNA) - The Chinese government is defending its policy of mass detention and re-education of Muslims in the country's northwest as an appropriate measure against terrorism, following a New York Times report that showed the direct involvement of senior government officials in ordering the policy.

Geng Shuang, a spokesman for the Ministry of Foreign Affairs, criticized the newspaper's report Nov. 18, saying it smeared China's efforts against extremism, but not disputing the authenticity of the leaked documents, The Times reported Monday.

The Xinjiang government said the earlier Times article was "completely fabricated by hostile forces at home and abroad ... America's New York Times has again fabricated and concocted fake news about Xinjiang. This is nothing more than getting up to its old tricks, and is completely unworthy of refutation. This despicable conduct will surely be met with the contempt of wiser minds in the international community."

The Times reports that Chinese President Xi Jinping laid the groundwork for the development of the mass detentions in a series of private speeches to officials in 2014 in which he called for "absolutely no mercy" toward 'terrorists'.

In Urumqi on April 30, 2014, Xi said that "the psychological impact of extremist religious thought on people must never be underestimated. People who are captured by religious extremism - male or female, old or young - have their consciences destroyed, lose their humanity and murder without blinking an eye."

According to the Times, 403 pages of documents, nearly half of which were speeches from Xi and other leaders, were leaked to it "by a member of the Chinese political establishment who ... expressed hope that their disclosure would prevent party leaders, including Mr. Xi, from escaping culpability for the mass detentions."

Among the documents, the Times said, are a model script for officials encountering returning university students who ask what has happened to their disappeared family members.

The students would be told to "treasure this chance for free education that the party and government has provided to thoroughly eradicate erroneous thinking, and also learn Chinese and job skills," which "offers a great foundation for a happy life for your family."

If the students asked if their relatives had committed any crime, they were to be told that while they hadn't, "it is just that their thinking has been infected by unhealthy thoughts ... freedom is only possible when this 'virus' in their thinking is eradicated and they are in good health."

The documents also detail the government's reaction to officials deemed to be inadequately zealous in the repression of the Uighurs.

Wang Yongzhi was appointed to run Yarkant county, 830 miles southwest of Urumqi, in 2014. Wang had detention facilities built which housed 20,000 people, but expressed misgivings about the policy, and released some 7,000 internees. After that, he was "detained, stripped of power and prosecuted" in 2017, according to the Times.

Xinjiang has experienced some terrorist attacks, including a massive knife attack at a train station in 2014 in which 31 people were killed and 141 wounded, but the Chinese government has repressed reports about the extent of the attacks, the Times reports.

The main victims of the Chinese crackdown on Muslims in the region are an ethnic group called the Uighurs. An estimated 1 million Uighurs have been detained in re-education camps in Xinjiang in the past three years, as part of a widespread effort by the government to "Sinicize" religion in the country.

The Chinese government at one time denied the camps even existed, but has since shifted to defending its actions as a reasonable response to a national security threat.

Government officials from the region said in July that the area's re-education camps for Muslims have been successful, with most of those held having been reintegrated into Chinese society.

During a Sept. 23 UN event on religious freedom, US vice president Mike Pence mentioned that "the Communist Party in China has arrested Christian pastors, banned the sale of Bibles, demolished churches, and imprisoned more than a million Uighurs in the Muslim population," and a fact sheet issued by the White House said the administration "is deeply concerned" for the interned Uighurs.

And the US State Department hosted a panel on the sidelines of the UN General Assembly Sept. 24 to draw attention to the "human rights crisis in Xinjiang," where partipants heard first-hand accounts of repression of Muslim groups in Xinjiang.

John Sullivan, deputy secretary of state, said at the panel that "The UN must seek the immediate, unhindered, and unmonitored access to Xinjiang for the UN High Commissioner for Human Rights. The United Nations, including its member states, have a responsibility to stand up for the human rights of people everywhere, including Muslims in Xinjiang. We urge the UN to investigate and closely monitor China's rights abuses, including the repression of religious freedom and belief."

"We cannot be the only guardians of the truth nor the only members of the international community to call out China and demand that they stop," Sullivan stated.

Pakistan is among the few Muslim-majority countries to have warned against the escalating persecution of the Uighurs.

The US Commerce Department in October added 28 Chinese organizations to a blacklist barring them from buying products from US companies, saying they cooperate in the detention and repression of the Uighurs.