The Australian High Court announced Wednesday that Cardinal George Pell's application for special leave to appeal has been refferred to the full court for decision. Pell is seeking to appeal an August decision by the Court of Appeal in Victoria to uphold his conviction for child sexual abuse. 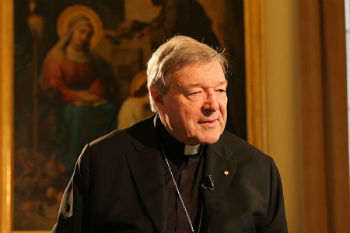 Melbourne, Australia, (CNA) - The Australian High Court announced Wednesday that Cardinal George Pell's application for special leave to appeal has been referred to the full court for decision. Pell is seeking to appeal an August decision by the Court of Appeal in Victoria to uphold his conviction for child sexual abuse.

His application will now be considered by all the members of Australia's highest court, and a decision is expected in March or April.

Pell's appeal to the High Court in Canberra, Australia's supreme court, is his last legal avenue to overturn a conviction which has divided opinion in the country and internationally.

Responding to the decision, Archbishop Anthony Fisher OP of Sydney said he "welcomed" the progress of the case at the High Court.

"The Cardinal has always maintained his innocence and continues to do so," Fisher said. "The divided judgment of the Court of Appeal reflects the divided opinion amongst jurors, legal commentators and within our community."

"For the sake of all involved in this case, I hope that the appeal will be heard as soon as possible," Fisher said on Wednesday.

On Wednesday morning, the Vatican also issued a statement "reiterating its trust in the Australian justice system."

"The Holy See acknowledges the decision of Australia's High Court to accept Card. George Pell's request of appeal, aware that the Cardinal has always maintained his innocence," the statement said.

"At this time, the Holy See reaffirms once again its closeness to those who have suffered because of sexual abuse on the part of members of the clergy."

The cardinal was convicted Dec. 11, 2018, on five charges that he sexually abused two choir boys after Sunday Mass while he was Archbishop of Melbourne in 1996 and 1997.

The cardinal, 78, who remains an archbishop and a member of the College of Cardinals, was returned to prison immediately after court adjourned. He has been held in solitary confinement and has not been permitted to celebrate Mass in prison.

Pell was convicted of exposing himself and forcing two choir boys to commit sex acts while fully vested in his Sunday Mass garb, almost immediately after Mass in the priests' sacristy at St. Patrick's Cathedral in 1996. Pell was at that time Archbishop of Melbourne. He was also convicted of fondling one of the boys in a corridor in 1997.

The prosecution rested on the testimony of one of the alleged victims - the one reported to have suffered two instances of abuse by Pell. The other victim died in 2014 and was unable to testify, but in 2001 had denied to his mother that any abuse occurred while he was a member of the choir.

Pell has maintained his innocence, with his defense making central the argument that the alleged crimes would have been, under the circumstances, "simply impossible."

The cardinal's defenders have contended that the sacristy abuse allegations are not possible given the high traffic after Mass and the obstructing nature of the Mass vestments.

Pell had appealed to the Court of Appeal in Victoria. Three judges considered his case and dismissed his procedural appeal. The judges were divided on Pell's primary ground of appeal, that the decision of the jury was "unreasonable."

"Even the 'reasonable possibility' that what the witnesses who testified to these matters may have been true must inevitably have led to an acquittal," Weinberg wrote, concluding that Pell had, in effect, been improperly asked to establish the "impossibility" of his guilt and not merely reasonable doubt.

All three judges granted further leave to appeal on the ground of the unreasonableness of the jury's conviction.

Media commentators and members of the Australian legal community have voiced concerns about the reasoning of the two judge majority opinion and the wider implications its argumentation could have for standards of evidence in criminal trials.

Holy See press office director Matteo Bruni responded to the Court of Appeal decision at the time by saying that "the Holy See acknowledges the court's decision to dismiss Cardinal Pell's appeal," while reiterating its "respect for the Australian judicial system."

"As the proceedings continue to develop, the Holy See recalls that the Cardinal has always maintained his innocence throughout the judicial process and that it is his right to appeal to the High Court," Bruni said at the time.

Correction: An earlier version of this post said that Cardinal Pell's petition for leave to appeal had been "granted" rather than "referred" to the full court for decision.