Two former employees of the cathedral school in Melbourne, Australia are expressing strong doubts about the charges that landed Cardinal George Pell - the most senior member of the hierarchy ever convicted of sexual abuse - in prison. 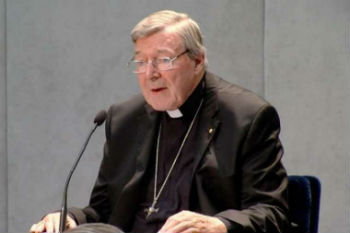 Cardinal Pell speaks with journalists after being charged with sexual abuse

Melbourne, Australia, (CNA) - Two former employees of the cathedral school in Melbourne, Australia are expressing strong doubts about the charges that landed Cardinal George Pell - the most senior member of the hierarchy ever convicted of sexual abuse - in prison.

The former employees, Lil Sinozic and Jean Corish, have also expressed disappointment that Pell's defence team did not call them as witnesses in the trial.

Pell, 78, was convicted of exposing himself and forcing two choir boys to commit sex acts while fully vested in his Sunday Mass garb, almost immediately after Mass in the priests' sacristy at St. Patrick's Cathedral in 1996. Pell was at that time Archbishop of Melbourne.

He was also convicted of fondling one of the boys in a corridor in 1997.

Pell has maintained his innocence, with his defense making central the argument that the alleged crimes would have been, under the circumstances, "simply impossible."

Both Cornish and Sinozic were on duty nearly every Sunday morning at the cathedral in late 1996.

Sinozic, a former teacher and executive assistant to then Father - now Monsignor - Charles Portelli, who was Pell's master of ceremonies, echoed the defense, insisting that the circumstances of the alleged crimes as presented to the jury simply did not add up.

"I just know for a fact that what they're describing could not have happened, given the situation in the sacristy after Mass...to say that there was this five minute interval where these acts were performed, and nobody saw or heard anything is ridiculous. I don't know why the jury was led to believe otherwise," she told CNA in an interview.

Pell was convicted Dec. 11, 2018 on five charges of sexual abuse. CNA reported last year that his initial trial, bound by a gag order, ended in a mistrial; this fact was confirmed by one of the judges in the Aug. 21 proceeding.

The prosecution rested on the testimony of one of the alleged victims - the one reported to have suffered two instances of abuse by Pell. The other victim died in 2014 and was unable to testify, but had in 2001 denied to his mother that any abuse occurred while he was a member of the choir.

Although Sinozic was not present on the date of the alleged incidents, she said she was very familiar with the Sunday Mass routine within the cathedral, and the behavior of the people involved.

"Normally the archbishop would go out the front of the cathedral, and he would spend at least half an hour, if not an hour, meeting and greeting people," she said.

"Particularly at that time, when he was new, everyone was curious about him and wanted to get to know him. So he would have spent quite a good deal of time out front just chatting to people. And then he was always followed by his entourage; he would have had his master of ceremonies, other people hanging on, and the sacristy was always busy as a beehive after Mass, as you might imagine."

She also pointed out that Cornish, her colleague, would have been patrolling the area where the alleged incident occurred "all the time" because there was a problem with tourists coming in near the sacristy, and walking into the cathedral during Mass.

Though Cornish told CNA that her recollections of the months of Oct. 1996 to Christmas 1996 are "sketchy to say the least," she confirmed Sinozic's view that it would be highly unlikely for the archbishop to be totally alone minutes after the end of Mass.

"It could be up to an hour after the end of Mass before the area was clear of people who were in all the areas mentioned by the accuser, including the priests sacristy which was the busiest of all the sacristies at that time," Cornish said in an emailed response to CNA's questions.

Cornish is the former principal of Good Shepherd Catholic school in Melbourne. She said her office at the time in 1996 was in the presbytery, which was connected to the cathedral.

The archbishop had asked her to be the lead staffer for the forthcoming centenary celebrations of St Patrick's Cathedral in addition to her regular job as the school principal.

She said the archbishop would always spend a great deal of time shaking hands and greeting people after Mass, even as protestors sometimes made their presence known with placards, shouting slogans like as "Pell go to hell" and "We will get you Pell no matter what."

Cornish also said she was in the habit of observing the activities and movement of people in the cathedral's sacristy area.

"This was something I had learned to do even in the short 2 months I had been there, as the main sacristy corridor door was open to allow the altar servers, the assistant sacristan, Ralph [now deceased] and Alan the florist as well as others who attended to the sanctuary and sacred vessels to access the area freely."

Cornish said she believes that the area where the abuse allegedly occurred was the "busiest and most open" of the sacristy areas, and reiterated that Pell was never alone before, during, or after a Sunday Mass.

If the boys made their way back there, she said she finds it hard to believe that no one saw them.

"George is too smart to do something so stupid. Why would he do something like that? Knowing that anyone could walk in any second," she commented.

Someone would have asked what they were doing, Sinozic said, particularly an hour after Mass when all the other boys would have gone home, and their parents would be wondering where they were.

In addition, the cathedral had an evening Mass, so additional people would have already been in the cathedral preparing, she said. Cornish agreed, adding that it was "quite a major undertaking" to get the church ready again after a large concelebrated Mass.

"And they never mentioned anything for 22 years...why all of a sudden?" Sinozic wondered.

The incident is alleged to have occured when Pell was fully vested for Mass. Sinozic expressed doubt that one of the boys would not have run away while the abuse was taking place, or at least called out to the other people that would have surely been in the area.

Court documents report that "the two boys made some objections but did not quite yell. They were sobbing, in shock, and whimpering. During the offending, Cardinal Pell told them to be quiet, trying to stop them from crying."

The Court of Appeals in Victoria upheld Pell's conviction last summer. After an appellate panel announced its decision at a court proceeding Aug. 21, the cardinal was returned to prison. The Chief Justice ruled that Pell will be eligible to apply for parole after he has served three years and eight months of his six year sentence.

Pell has been held in solitary confinement, and is not permitted to celebrate Mass in prison. He has recently obtained a prison job weeding a courtyard.

Cornish said Paul Galbally, Pell's solicitor, contacted her prior to his first trial, and they talked at length and then again later. She said she had to think through the dates at first, and then called him and told him she was not actually in an office in the sacristies at that time, but later had a full-time job and an office diagonally across the corridor from the archbishop's sacristy.

"I think Paul did not think my testimony would be helpful," she said.

Sinozic also spoke to Pell's solicitor at the beginning of the trial, but says she was never contacted after that. She said she'd agreed to testify, but said she suspects that she was not called as a witness because she wasn't there on those actual dates.

"I think maybe they thought it wasn't necessary, but I thought it would have given the jury a different perspective of the man if two laypeople got up, particularly women, and particularly teachers," she commented.

"We know how to spot children who are out of place, because we did yard duty for many years and we can tell if something's amiss. And we would have given a different side of view for the jury to perhaps reflect on. Because they were saying it's just priests sticking up for each other - a men's club."

Cornish echoed Sinozic, saying that both of them dealt with every aspect of cathedral life, with Lil having been a vice principal and Jean having been a principal of a school of 1,000 children, and having dealt with pedophile cases before.

"I just think that Lillian Sinozic and I would have perhaps been able to give an overall picture long term of the workings of the cathedral from a female perspective...However I accept that at the time the lawyers probably thought we could not add anything to the picture."

Pell's attorneys did not respond to a CNA request for comment.

Pell's appeal was presented on three grounds, two of which were procedural and dismissed by all three appeal judges.

The judges were divided on Pell's primary ground of appeal, that the decision of the jury was "unreasonable."

"Pell comes across on TV as a bit arrogant and cold, but that's not what he's really like," Sinozic said.

"And people get the wrong idea of him and just dislike him for some reason. So they were happy to blame him and use him as a scapegoat for all the other people that did something."

"Nothing will convince me that the Cardinal was capable or had tendencies towards committing this crime. A finer, more upstanding man I have never met," she said.

"He is a man of black and white. He says what he believes, always taught what is right and is no man's fool...He is a family man, equally at home in the presence of women, men and children."