While Christians in Iraq and Syria suffer in the aftermath of Islamic State genocide, a new "hot spot" of persecution has emerged in South and East Asia, a recent report finds. 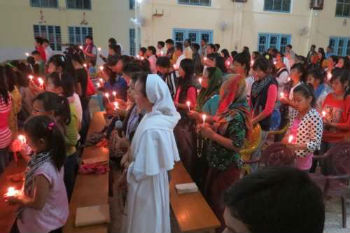 New York City, N.Y., (CNA) - While Christians in Iraq and Syria suffer in the aftermath of Islamic State genocide, a new "hot spot" of persecution has emerged in South and East Asia, a recent report finds.

"The situation for Christians has deteriorated most in South and East Asia: this is now the regional hot spot for persecution, taking over that dubious honour from the Middle East," stated a report on global Christian persecution by the group Aid to the Church in Need, a pontifical foundation that provides relief to Christians in 140 countries.

ACN released its biennial study of the global persecution of Christians Oct. 23. The 2019 report "Persecuted and Forgotten?" compiled information on acts of harassment, violence, and discrimination committed against Christians over the span of 25 months from July 2017 through July 2019; details on the persecution were gathered by ACN on fact-finding trips.

One of the report's chief conclusions was that of all persecuted Christians, "Christian women suffer the most, with reports of abductions, forced conversions and sex attacks."

"The words of Jesus to his disciples are there to remind us what His followers should expect: 'If they persecuted Me, they will also persecute you,'" stated Cardinal Joseph Coutts of Karachi in the report's introduction.

"We unite our sufferings with those who suffer more than us and find inspiration in the words of the Apostle Paul: 'We are afflicted in every way, but not crushed; perplexed, but not despairing; persecuted, but not forsaken; struck down, but not destroyed; always carrying about in the body the dying of Jesus, that the life of Jesus also may be manifested in our body,'" the archbishop said.

While the Islamic State genocide against Christians in Iraq and Syria, beginning in 2014, drew international condemnation in recent years, the killings, beatings, and harassment of Christians in India, Sri Lanka, and Burma - along with ongoing persecution of Christians in China and North Korea - have created a regional problem that is now the worst in the world, ACN has warned.

After Sri Lanka's civil war ended ten years ago, minority Christians and Muslims have suffered attacks by Sinhalese Buddhist nationalists, but the scope of the violence changed dramatically on Easter Sunday.

A series of coordinated bombings, for which the Islamic State claimed responsibility, targeted churches and hotels during the Paschal Triduum, and killed 258 people while injuring around 500.

In the wake of the attacks, Cardinal Malcolm Ranjith of Colombo alleged that the government could have done more to prevent the bombings and told ACN that "five training camps for jihadists have been found."

"The attack signaled that, while the Islamists had switched strategy away from territorial gain to guerrilla warfare, attacking Christians was still a primary objective," ACN reported of the Sri Lanka bombings.

In India, Christian leaders have been warning of a rise in Hindu nationalism that threatens to marginalize minority religions through violence and intimidation.

Some of the attacks were horrific, including the gang-rape of five female workers at a Christian NGO in the northeastern state of Jharkhand.

In one case in September 2018, an elderly Christian woman was beaten in Veppur village on the date of a Hindu festival for walking on the road and thus defiling it; rocks were thrown at Christians who tried to help her.

In another case in February, a church in Karkeli village was attacked by a mob, and as CNA reported in September, a Jesuit-run mission school in Jharkhand was attacked by a violent mob of Hindu extremists where students and staff were beaten, in some cases severely.

Yet attacks like these continue with "impunity" because of an apparent reluctance by the government to investigate and prosecute, ACN says.

In the spring of 2019, India's Prime Minister Narendra Modi of the Hindu nationalist Bharatiya Janata Party won a second term in office, sparking concerns by Christian leaders of a worsening persecution.

North Korea has long been recognized as "the worst place in the world to be a Christian," ACN says, with "upwards of 70,000 Christians" detained in harsh labor camps with reports of "extra-judicial killings, forced labor, torture, persecution, starvation, rape, forced abortion and sexual violence."

China reportedly arrested underground Catholic Bishop Peter Shao Zhumin of Wenzhou and detained him for seven months just after an agreement had been reached with the Vatican on the selection of bishops. The government also banned the online sale of Bibles in April 2018 in order to promote "a new version compatible with Sinicization and socialism."

In the Philippines, bombings during Sunday Mass at the Cathedral of Our Lady of Mount Carmel in Jolo killed 20 people and injured more than 100 in January.

Christian communities which have existed for centuries have long been dwindling in Iraq and Syria due to the ongoing Syrian civil war, the 2003 U.S. invasion of Iraq, and the Islamic State genocide. Current estimates of Christians in Iraq range from "well below" 150,000 to below even 120,000, a mere fraction of the 1.5 million who lived there in 2003.

According to local priest Father Amanuel Kloo, the Christian population in Mosul has all but disappeared; there were 35,000 Christians in the city in 2003, at least 6,000 in 2014, and now just 40 Christians remain.

In Aleppo, "once one of the most significant centres for the Church in the whole of the Middle East," the Christian population has dropped by more than 80 percent in eight years, the report said. Young men are fleeing military service, and others cannot bear the economic hardship or the increasing marginalization of Christians in society.

The suffering of Middle Eastern Christians, however, "reached its zenith" in the last two years, ACN says.

Although the Islamic State caliphate no longer exists, many of the group's militants are still present in the region and "extreme poverty" remains a serious concern to the future of Christians in Syria. Some Iraqi Christians have still not been able to return to their homes, while others who have are facing harassment by local militias.

In Egypt, Copts have suffered a slew of violent attacks albeit with decreasing scope and severity over time. Nevertheless, Christians especially in rural areas face regular attacks, harassment, and discrimination, and while the state authorized 340 churches to be built in 2018, 3,740 churches have yet to be approved, revealing one challenge to the growth of the Church in the Muslim-majority country.

Nigeria has continued to be a hotbed of Christian persecution, with the continuation of attacks by the radical Islamist group Boko Haram in the country's northeast, and the rise of atrocities committed by Fulani herdsmen, most of whom are Muslim, in the country's Middle Belt region.