Cardinal Charles Maung Bo of Yangon has decried Burma's ongoing violence, and encouraged religious leaders to raise their voices in defense of the vulnerable. 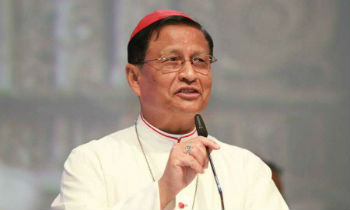 "Not a single day passes without the heart wrenching news of innocent civilians being displaced or killed or maimed by the ongoing conflict in Lashio, other Northern regions and Rakhine State," Cardinal Bo said Oct. 1.

"[I was] pained by the silence of religious leaders," he added.

Beginning in late 2016 the Rohingya, a Muslim minority group who have mostly occupied Burma's Rakhine state, faced a sharp increase in state-sponsored violence in their homeland. Tens of thousands of people have been displaced, and the military has been accused of conducting numerous human violations such as rape and murder.

Despite widespread use of the word Rohingya in the international community, the term is controversial within Burma. The Burmese government refuses to use the term, and considers them illegal immigrants from Bangladesh. They have been denied citizenship and numerous other rights since a controversial law was enacted in 1982.

Burma is also known as Myanmar, a name which the U.S. government and many democracy activists oppose, because they say it was illegally imposed on the country by its military dictatorship.

According to UCA News, on the day of the cardinal's statement, five civilians were injured during an artillery attack in Rakhine. A Buddhist monk, novice, teacher, and two students were harmed.

Bo criticized the government asking, "where is the mercy?" He said the military forces are not concerned with the people's safety nor have these groups shied away from heavy weapons, like arial bombs. He also said many citizens lack basic necessities.

"I had served as the priest and bishop in this area for almost 20 years. Most of these people are extremely poor and innocent people," he said. "Striving for basic needs is their daily unending struggle. No group had done any economic development for these people."

"A ferocious conflict rages in around them, forcing them to flee. With pain and sorrow, I have been witness to their tears, their blood and their brokenness," he added.

Bo expressed disappointment with the lack of response from the Buddhist and Christian communities. He said that in Burma the Buddist population has 500,000 monks and 70,000 nuns, and the Christian community has over 1000 pastors and 2000 Catholic nuns.

"Some silence can be criminal. The war pursued is unjust and unholy. Our prayers and rituals are nullified by the blood and tears of innocent people," the cardinal said.

"Myanmar people are peace-loving and follow the guidelines of their religious leaders. There is a huge potential for peace through religious leaders. Kindly raise your voice against this mutilating war," he said. "Kindly speak out. Peace is possible, Peace is the only way."

Since 2018, conflicts between the Myanmar military and Arakan Army have displaced 33,000 people in Rakhine and Chin states, UCA News reported.

At a United Nations forum in New York in July, Cardinal Bo emphasized the important role of religious leaders in Burma. He urged world leaders to recognize the positive influence of religion and its members.

"The nation has been wounded by festering wars," Cardinal Bo said, according to UCA News. "For the nearly six decades of its existence, the country has been at war, brother against brother. So much blood and tears have been shed."

"[The role of religious leaders] in maintaining peace through imparting values like compassion is an extraordinary contribution to the peace of Myanmar," he added. "Religious people impart great values in society."