As part of its crackdown on religion, the Chinese Communist Party is requiring healthcare workers to grill gravely ill patients about their religious beliefs before treating them, human rights advocacy group Bitter Winter has reported. 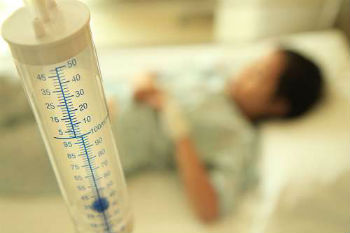 Beijing, China, (CNA) - As part of its crackdown on religion, the Chinese Communist Party is requiring healthcare workers to grill gravely ill patients about their religious beliefs before treating them, human rights advocacy group Bitter Winter has reported.
In an Aug. 28 article, Tang Wanming of Bitter Winter reported that a pregnant woman experiencing heavy and dangerous bleeding in Shandong province was questioned twice about her religion before being admitted for surgery at a local hospital.

"She's in so much pain. Why are you asking her these questions?" a family member reportedly asked. The nurse told the family that the government required healthcare workers to gather certain information about patients, including their religious beliefs, before they were treated.

In another story recounted by the human rights group, a 46-year-old man in severe need of insulin declined treatment at a formal hospital for fear that he would expose his family, who belong to a new religious movement, to persecution by the state.

"I would rather die than have my wife and son implicated and arrested along with me," he reportedly said. He later died.

Religious questioning by healthcare workers has been taking place in Shandong, Hebei, Heilongjiang, and Henan provinces for about a year, though in some cases it has been happening since 2017, anonymous workers told Bitter Winter.

Besides the requirement to record a patient's religious beliefs, Bitter Winter also reported that healthcare workers in multiple provinces reported that their local governments had banned prayer and other religious activities in medical facilities.

Bitter Winter said they interviewed numerous workers in the medical field, all of whom said they did not understand the purpose of religious questioning during healthcare visits.

"Some patients didn't know why such questions were asked, but they still gave a truthful account of their religious faith. It isn't a good thing. It may seem innocuous at the moment, but the government can exploit this information if it needs to," a Henan healthcare worker told Bitter Winter.

Once a patient's religious beliefs are recorded, they are uploaded along with other personal information to a government database, one hospital director told Bitter Winter.

This information can and typically does count against citizens in the future, restricting their ability to travel, get a job or social security, or participate in other aspects of public life. Human rights advocates fear that religious beliefs are counted against citizens in the "social credit system", a point-based system developed by the CCP beginning in 2014 that tracks citizens, and rewards or detracts points to citizens based on desirable or undesirable social behaviors.

According to a Jan. 21 article by Bitter Winter, the social credit system works as follows: "Points will be deducted for 'pestering' the government or enterprises; for defaming others online; or for making or selling counterfeit goods. This score will determine whether one can travel out of town; whether one can be promoted at work; whether one can buy a car or property; and even what kind of school one's children can attend."

The registration of citizen's religious beliefs and their social punishment is a continuation of the growing list of abuses of religious freedom in China at the hands of the CCP, including the disruptions of unofficial religious funerals, weddings, and other ceremonies, the destruction and burning of churches, and the jailing, torture, and harassment of believers, including the detainment of an estimated 1 million Uighur Muslims in "re-education" internment camps. While the Chinese government claims to have released most of these Muslims, this has been met with scepticism outside China.

The government crackdowns on religion are part of their widespread effort to "sinicize" religions - to align religious beliefs with standard Communist Chinese beliefs.

The CCP also maintains a list of "xie jiao" (roughly translated 'evil cults') which are blacklisted religious organizations and officially illegal in the country. The list includes anything that falls outside the five branches of government-approved religion: Protestantism, Catholicism, Buddhism, Daoism, and Islam.

Edward Irons, a Hong Kong researcher and writer on Chinese religion and culture, told Bitter Winter in 2018 that "being on the list means the full weight of state coercion can be applied against any individual associated with any of the groups on the list," and that being a part of these groups is punishable by 3-7 years in prison "or more."

Rep. Chris Smith (R-NJ), co-chair of the Tom Lantos Human Rights Commission, told a congressional hearing June 27 that religious persecution of Christians in China has "never been worse than it is right now."

As for the Catholic Church in China, it has been split since 1957 between the "underground" Church, whose bishops have been in full communion with Rome, and the state-run Chinese Patriotic Catholic Association, for which the Chinese government illicitly appointed bishops.

A recent, controversial agreement between the Vatican and the CCP signed in September 2018 aims to end this division, though some Catholic leaders have expressed doubt in the Chinese government's sincerity in honoring the deal.

Bishop Antonio Yao Shun, the first bishop to be ordained under the Vatican-China deal, was consecrated Bishop of Jining Aug. 26.