As massive protests continue in Hong Kong, one student leader says Catholics have an important role to play in encouraging demonstrators to remain peaceful in asserting their demands. 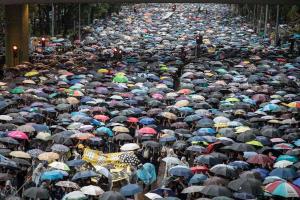 Hong Kong, China, (CNA) - "The protests last Sunday [were] very peaceful, peaceful protests. And very luckily, there were no major conflicts between the police and the protestors," Edwin Chow, acting president of the Hong Kong Federation of Catholic Students, told CNA in an interview.

Despite the threat of violence from police and growing concern about a potential crackdown by Chinese authorities, an estimated 1.7 million people took to the streets of Hong Kong last Sunday for a largely peaceful demonstration in the pouring rain.

The largest protest has so far this year has been an estimated 2 million-strong crowd on June 6. At some of the protests, police and some protesters have resorted to violence.

"From June to the previous protest, almost every time, the police have used tear gas and bullets. But this time, for this weekend, actually the police did not use any tear gas and they didn't have any serious clash between the protesters and the police," Chow said.

Protesters continue to demonstrate against the use of excessive force by the police, as well as the potential for Hong Kong to begin extraditing suspected criminals to stand trial in mainland China.

The bill proposing extraditions to China, which was introduced in Hong Kong's government in February, has been indefinitely suspended, but Christians in Hong Kong remain worried that the Chinese Communist government will continue to find ways to persecute those who are helping Christians in mainland China, where freedom of religion is severely restricted.

The apostolic administrator of Hong Kong, Cardinal John Tong, has asked the government to eliminate the extradition law completely, and for an independent inquiry into the excessive use of force by the Hong Kong police.

The Hong Kong Federation of Catholic Students organized members to attend the protest and also held a prayer meeting before Sunday's march. Chow said many more protests are already planned for August, and early next month students are planning to "strike" on the first day of class.

"My class will start on the 2nd of September, but actually the student union, most of the university students, we are planning to have a strike on that day. That is a must, I think, this will happen. We will go on strike."

Chow, a student studying Government and International Studies at Hong Kong Baptist University, told CNA last week that he would like to see Catholics and other Christians take on a larger role in ongoing protests against the government.

While Chow said that Christians, among them Catholics, had a more major role when the protests beganâ€" leading the singing of hymns such as "Sing Hallelujah to the Lord" in the streets during the protests, for exampleâ€" their role has since diminished.

"It's a good chance for us to become united. Because I think for most of the Catholics and Christians, we have the same values, the same goal...so that's why we cooperate, and I think after Christians and Catholics cooperate, our strengths, our power becomes stronger," he told CNA last week.

Chow said he believes the protestors are changing their tactics to try to be less disruptive. A number of protests held in the last few weeks in the city's busy international airport caused a lot of noise and disruption, he said.

"So the protestors adjusted their strategy. They think that a peaceful protest maybe can gain more support. I think due to the previous clash, and too much violence, maybe we have lost some support, so we want to gain it again," Chow explained.

"And also I think the main theme of the protests is...police violence; it's hard to convince people that we are against violence when we use violence. So I think this is the main reason why this protest this weekend was [more] peaceful."

Chow believes that Christians groups can play an important role in encouraging protestors to remain peaceful and not be carried away by emotion.

"For the Catholic groups, for the Christian groups, we have the responsibility and we have the power to calm our friends down. Because I think singing hymns, just in the beginning, it creates a peaceful atmosphere, and it has a power to keep everyone very calm. So I think we can use this when we do this again."

Chow said there is an interesting protest set to take place this Friday, wherein protestors plan to form a human chain as part of the demonstration.

"This week, almost every day we have protests," he said.

"For tomorrow, the secondary students also have their own protest, their own assembly...it's a very busy month, very busy, these two months for Hong Kong people. Because actually, we almost protest every day."

Chow said the Catholic clergy have been very supportive. The Federation invited bishop emeritus Cardinal Joseph Zen to celebrate Mass on June 16, in front of the government headquarters.

Auxiliary Bishop Joseph Ha Chi-shing has also been very active in going to the protest sites, supporting the young people, and vocally supporting the protestors. Bishop Ha took part in a continuous ecumenical prayer meeting outside the Legislative Council building with thousands of Christians overnight after one rally.

In the US, the Archdiocese of San Francisco Chinese Ministry and the Office of Human Life & Dignity are inviting the faithful to a prayer vigil for Hong Kong at 6:30 pm on August 26 at St. Anne of the Sunset Church in San Francisco. The service is set to include scripture readings, Eucharistic Adoration, and Benediction.