Scientists are hopeful after a clinical trial of two experimental drugs in the Democratic Republic of the Congo (DRC) showed promise in treating the deadly Ebola virus. 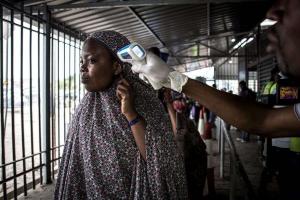 Kinshasa, Democratic Republic of the Congo, (CNA) -  Regeneron's REGN-EB3 and a monoclonal antibody known as mAb114 were among four experimental drugs being tested in a recent DRC trial, Reuters reported. Both were developed from the antibodies of people who had survived Ebola.

The other two products being tested displayed less success in the clinical trial, and further testing of them has been discontinued.

Ebola is a deadly virus that is primarily spread through contact with bodily fluids. Symptoms include fever, vomiting, diarrhea, muscle pains and occasional bleeding.

The virus can be fatal in up to 90% of cases. However, patients in the clinical trial who received REGN-EB3 had only a 29% fatality rate, and those on mAb-114 had a 34% fatality rate, the BBC reported.

Among patients with only a low level of the virus in their blood, survival rates were even better, around 90%.

Experts hailed the study as a step toward finding a treatment for Ebola and preventing major outbreaks.

Mike Ryan, who leads the emergency program for the World Health Organization, called the news "fantastic," telling journalists that while the drugs alone will not stop Ebola, the study "gives us a new tool in our toolbox."

Anthony Fauci, head of the U.S. National Institute of Allergy and Infectious Diseases and one of the leaders of the trial, emphasized that "we do now have what look like (two) treatments for a disease for which not long ago we really had no approach at all," according to Reuters.

The drugs will now be widely available to patients in the DRC, which is battling the second largest Ebola outbreak in history. More than 2,500 people in the country have been infected, and more than 1,800 killed, since the outbreak began last August.

Last month, the World Health Organization labeled the DRC outbreak an international health emergency, only the fifth time in history that the designation has been used.

The declaration, which critics called overdue, designates "an extraordinary event which is determined to constitute a public health risk to other States through the international spread of disease and to potentially require a coordinated international response."

The declaration was made after a priest died from Ebola in Goma, a city of some 2 million residents, which serves as a major crossroads on the border with Rwanda.

Risk of the virus being transmitted to neighboring countries is "very high," WHO officials said, although outside of the immediate region, risk remains low.

Two Ebola fatalities were confirmed in Uganda in June, after the victims returned from a funeral in DRC. Kenya and Rwanda have also been on high alert for signs that the virus may have entered the country.

Efforts to contain the disease have been hampered by misinformation and distrust on the part of local communities, who in some cases have retaliated against health teams by attacking them. Nearly 200 attacks on medical centers and staff have been reported this year, according to the BBC. This has limited many of the health services that non-governmental organizations are able to provide.

Catholic Relief Services has been supporting local Caritas partners in responding through education campaigns to help residents know how to prevent and respond to the virus.

More than 160,000 people have received the Ebola vaccine, which is 99% effective, according to the BBC, but many more are fearful of it and refuse to receive it. In addition, violence in the eastern part of the DRC has made it difficult to reach some areas of the country, and difficult to monitor the virus as it spreads.

During the 2014-2016 outbreak in West Africa, the worst in history, Catholic Relief Services and Caritas worked to treat those who were infected, support Ebola orphans, provide food support and educate people on hygiene practices to help avoid the spread of the virus, such as hand washing and avoiding contact with dead bodies.