Catholics university students in Hong Kong are joining their voices to the widespread protests against a now-suspended proposal to permit extraditions to mainland China. 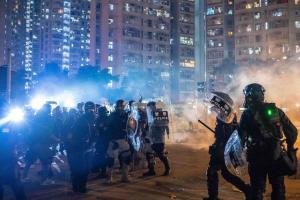 "They believe that if we do not act right now, we will never have a chance again. They want to protect their home," he told ucanews.

The legislation drew widespread protest and was placed on hold indefinitely in June, but protests have continued, drawing hundreds of thousands of participants. Demonstrators are calling for the proposal to be definitively withdrawn, and some are demanding Lam's resignation.

Advocacy groups have voiced concern that the bill could endanger the freedom that Christians in Hong Kong currently enjoy.

The Hong Kong Federation of Catholic Students has been a vocal presence against the proposal, handing out pamphlets against it and participating in marches and prayer services calling for its rejection. It is planning to reach out to Catholic parishes, in the hopes of drawing further participation, according to ucanews.

Chow said more than 160,000 students, teachers, and alumni signed a petition against the extradition bill.

Several Catholic leaders have also spoken out in support of the protestors and urged dialogue and peace.

Cardinal Joseph Zen, bishop emeritus of Hong Kong, held a Mass and prayer service to pray for "the future of [Hong Kong]" and posted a message of support for the demonstrators on social media.

Auxiliary Bishop Joseph Ha Chi-shing of Hong Kong took part in a continuous ecumenical prayer meeting outside the Legislative Council building with thousands of Christians overnight after one rally. Chow told ucanews that Bishop Ha is seen by many young people as a witness of peaceful protest.

Cardinal John Tong Hon, Apostolic Administrator of Hong Kong, was one of six religious leaders to join a coalition representing Catholicism, Protestant Christianity, Confucianism, Taoism, Buddhism, and Islam. The coalition has called for an end to violent protests, stressed the need for individual rights to be respected, and urged the government and the protestors to sit down together to engage in dialogue.

In a June 12 statement, the Diocese of Hong Kong lamented that the dispute over the extradition bill "has now come to a violence and bloodshed stage."

"Therefore, once more we make an urgent appeal, that the SAR Government and the general public exercise restraint and seek a solution to the current dilemma through peaceful, rational channels," the diocese said.

Hongkongers currently have significantly more freedoms than Chinese living on the mainland, including access to uncensored internet. Hong Kong was a British colony until 1997, and it was returned to China under a "one country, two systems" principle, allowing it its own legislature and economic system.

The Church in mainland China has been divided for some 60 years between the underground Church, which is persecuted and whose episcopal appointments are frequently not acknowledged by Chinese authorities, and the Chinese Patriotic Catholic Association, a government-sanctioned organization.