Two cardinals from the Philippines and Burma visited a Rohingya refugee camp in Bangladesh this week, meeting with refugee families as well as relief agency personnel and government officials. 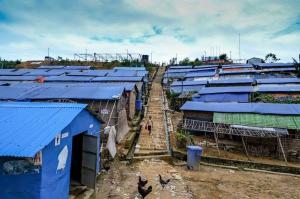 Cardinal Tagle is the president of Caritas Internationalis, a global confederation of Catholic relief and development agencies, which has helped more than half a million Rohingya refugees by providing shelter, water, sanitation, hygiene, and living supplies.

Cardinal Bo is the president of the Federation of Asian Bishops Conferences (FABC).

The cardinals talked to refugee families in the camps and met with Caritas volunteers and staff, who are helping provide necessities to the refugees.

They also met with Muhammad Abul Kalam, the chief of Bangladesh's Refugee Relief and Repatriation Commission, which oversees the 30 refugee camps housing nearly 1 million refugees in the country.

Abul Kalam told ucanews.com that he thanked the cardinals for the Church's efforts to help the refugees, and explained to them the serious obstacles facing those in the camps.

"I believe the cardinals now have a good idea of the various challenges the refugees are going through, especially the risks during monsoon season as well as health and environmental problems," he said.

The cardinals were joined during their visit by Cardinal Patrick D'Rozario of Dhaka, Bangladesh; Holy Cross Archbishop Moses Costa of Chittagong; and Bishop Gervas Rozario of Rajshahi, ucanews.com reported.

In 2017 the Rohingya, a Muslim minority group, faced a sharp increase in state-sponsored violence in Burma, also known as Myanmar.

The Burmese government refused to use the term Rohingya, and considers them illegal immigrants from Bangladesh. They have been denied citizenship and numerous other rights since a controversial law was enacted in 1982.

The violence reached levels that led the United Nations to declare the crisis "a textbook example of ethnic cleansing."

More than 1 million Rohingya fled across the border to Bangladesh, and are living in refugee camps, many of which are located in a swampy sort of "buffer zone" along the border between the two countries.

Bangladesh and Burma agreed to a repatriation program late last year, but few Rohingya have returned to their homeland.

This trip was Cardinal Tagle's second visit to a Rohingya refugee camp. He made a similar visit last December, describing the camp as "a cry to the whole world for a better politics based on compassion and solidarity."

"When will we learn our lessons and be able to stop a crisis of this magnitude happening again? How as an international community and a human family can we get back to the basics of dignity, care and compassion?" he said at the time.