Chinese officials claim most Xinjiang detainees have been released

Government officials from China's Xinjiang Uighur Autonomous Region said Tuesday that the area's re-education camps for Muslims have been successful, with most of those held having been reintegrated into Chinese society. 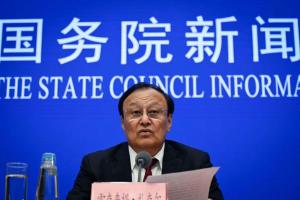 Beijing, China, (CNA) - An estimated 1 million Uighurs, members of a Muslim ethnoreligious group, have been detained in re-education camps in Xinjiang, a region in China's northwest that is roughly the size of Iran.

The Chinese government has said reports on the camps by Western governments and media are unfounded, claiming they are vocational training centers and that it is combatting extremism.

Shohrat Zakir, chairman of Xinjiang, said at a July 30 press conference in Beijing that "most of the graduates from the vocational training centers have been reintegrated into society," according to the AP. "More than 90% of the graduates have found satisfactory jobs with good incomes."

While they are not permitted to practice their religion during their "period of study", he said, they may do so at home.

Tuniaz also said that "the majority of personnel who received education and training have returned to society and gone back to their homes," according to the Wall Street Journal. "The majority have successfully secured employment."

Neither Zakir nor Tuniaz provided figures to back up their claims.

The press briefing also included a performances by minority artists in traditional garb, highlighting Xinjiang as a tourist destination.

The Xinjiang officials' claims were met with scepticism outside China; David Brophy, senior lecturer in modern Chinese History at the University of Sydney, said to the Wall Street Journal "How much of this employment involves forced relocation to elsewhere in China? How much of it is taking place in education camps that have now been repurposed as heavily surveilled factories?"

In August 2014 officials in Karamay, a city of Xinjiang, banned "youths with long beards" and anyone wearing headscarves, veils, burqas, or clothes with the crescent moon and star symbol from using public transit. That May, universities across the region banned fasting during Ramadan.

Attention was drawn to the human and religious rights situation in Xinjiang at the recent Ministerial to Advance Religious Freedom held by the US State Department earlier this month.

US Secretary of State Mike Pompeo said July 18 at the gathering that survivors of the detention camps have described "a deliberate attempt by Beijing to strangle Uighur culture and stamp out" Islam.

In response, Chinese officials have been outspoken in defense of policies in the region.

In June, Rep. Chris Smith (R-NJ) told a congressional hearing that China's campaign to "sinicize" religion is proceeding with brutal efficiency. "Under â€~sinicization,â€ all religions and believers must comport with and aggressively promote communist ideology -- or else," Smith said.

"Religious believers of every persuasion are harassed, arrested, jailed, or tortured. Only the compliant are left relatively unscathed," Smith stated.