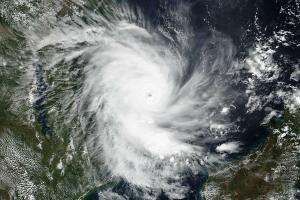 Pemba, Mozambique, (CNA) - "Entire villages have been flattened. Roads have been washed out. And bridges have been destroyed," Erica Dahl-Bredine, CRS' country representative of Lesotho and Mozambique, said April 30. "We're just beginning to fully understand the extent of the damage. In fact, the number of people who have been impacted by this storm continues to climb."

"The local Church is doing an incredible job of helping the people of Mozambique in both regions and has mobilized an enormous army of volunteers to assist in these dual relief efforts," Dahl-Bredine commented.

"But additional support will be needed from the international community before more people lose their lives."

Landslides have destroyed numerous roads, making it difficult for humanitarian groups to access vulnerable areas, and a lack of resources and immediate aid is a concern, according to CRS.

Cyclone Kenneth particularly damaged the coastal districts of Cabo Delgado Province. Even after the cyclone passed, heavy rainfalls have continued to devastate the provincial capital, Pemba.

Catholic Relief Services said there are more than 168,000 people in urgent need of help. Mozambique is one of the poorest African countries, with 65% below the poverty line.

Dahl-Bredine said some areas are more at risk: "On Sunday, landslides triggered by a torrential downpour were reported in certain low-lying neighborhoods. In one case, a landslide dumped so much trash on top of people's houses that the ensuing debris caused several reported deaths."

"This is a part of Mozambique that is already more vulnerable to these types of storms because of its relative lack of resources."

Beside a lack of food and clean water, one of the major concerns is waterborne diseases, such as cholera, typhoid, and malaria.

"When a storm like this hits with so much devastation, ensuring proper hygiene and sanitation practices becomes vital to stemming a deadly disease outbreak," she further added.

CRS is working with the local government to provide support to some of the hardest hit areas in Pemba, including temporary shelter, food, and other necessities. The country has also received aid from Caritas, Save the Children, and the UN, who recently offered $13 million to Mozambique and Comoros Island.

Maria Auxiliadora parish in Pema is housing nearly 1,000 people displaced by the cyclone.

As the area has a large Muslim population, Father Ricardo Filipe Rosa Marques told the Associated Press that the Catholic Church is open to all.

"We don't ask about people's religions, human life is all we value," he said.

Although some Muslims have refused help because they have not wanted to enter a Catholic church, he said, a large portion of people have appreciated the support and banded together in solidarity.

"People here have suffered a lot. They have been through (Portuguese) colonialism, civil war and the recent killings. They have been living with scars for years yet their love and sense of sharing is amazing," he said.