The bishops' conference of Zimbabwe approved Wednesday the opening of the cause for canonization of John Bradburne, a lay missionary to the area in the 1970s, according to a report. 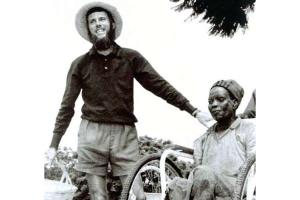 Harare, Zimbabwe, (CNA) - Independent Catholic News reported May 1 that the bishops had given their approval unanimously, and that the cause will be launched Sept. 5.

Bradburne was born in 1921 in England, the son of an Anglican clergyman. He served in the British army in World War II, and he converted to Catholicism in 1947 after staying with the Benedictines of Buckfast Abbey.

He wished to become a monk at Buckfast, but had not been long enough in the Church, and he became a wanderer throughout Europe and the Middle East. He was a prolific poet. He stayed at other Benedictine abbeys, with Carthusians, the Congregation of Our Lady of Sion, tried living as a hermit on Dartmoor in England, and became a Third Order Franciscan in 1956.

Through a Jesuit friend in the British colony of Southern Rhodesia (present-day Zimbabwe), Bradburne came to serve at the Mutemwa Leper Settlement, spending the last 10 years of his life there.

Southern Rhodesia declared independence in 1965, and the Rhodesian Bush War was fought from 1964 to 1979 among the white minority government, the Marxist Zimbabwe People's Revolutionary Army, and the Zimbabwe African National Union (ZANU).

As ZANU forces approached Mutemwa, Bradburne was urged to leave, but he insisted on remaining. He was kidnapped, and murdered Sept. 5, 1979.

He had confided in a Franciscan priest that his wishes were to serve leprosy patients, to die a martyr, and to be buried in the habit of St. Francis.

According to Independent Catholic News, two people have claimed miraculous cures through Bradburne's intercession: a woman in South African who regained the use of her legs, and a man in Scotland cured of a brain tumor.

The Jonn Bradburne Memorial Society is supporting the an investigation into his life and viritues. It wishes to raise GBP 20,000 ($26,600) for the investigation. The group was led by Bradburne's niece, Celia Brigstocke, until her death in August 2018. Brigstocke's eldest daughter, Kate Macpherson, now leads the efforts.